Bread Without Bags: One Girl’s Vision of a Single-Use Plastic Free World 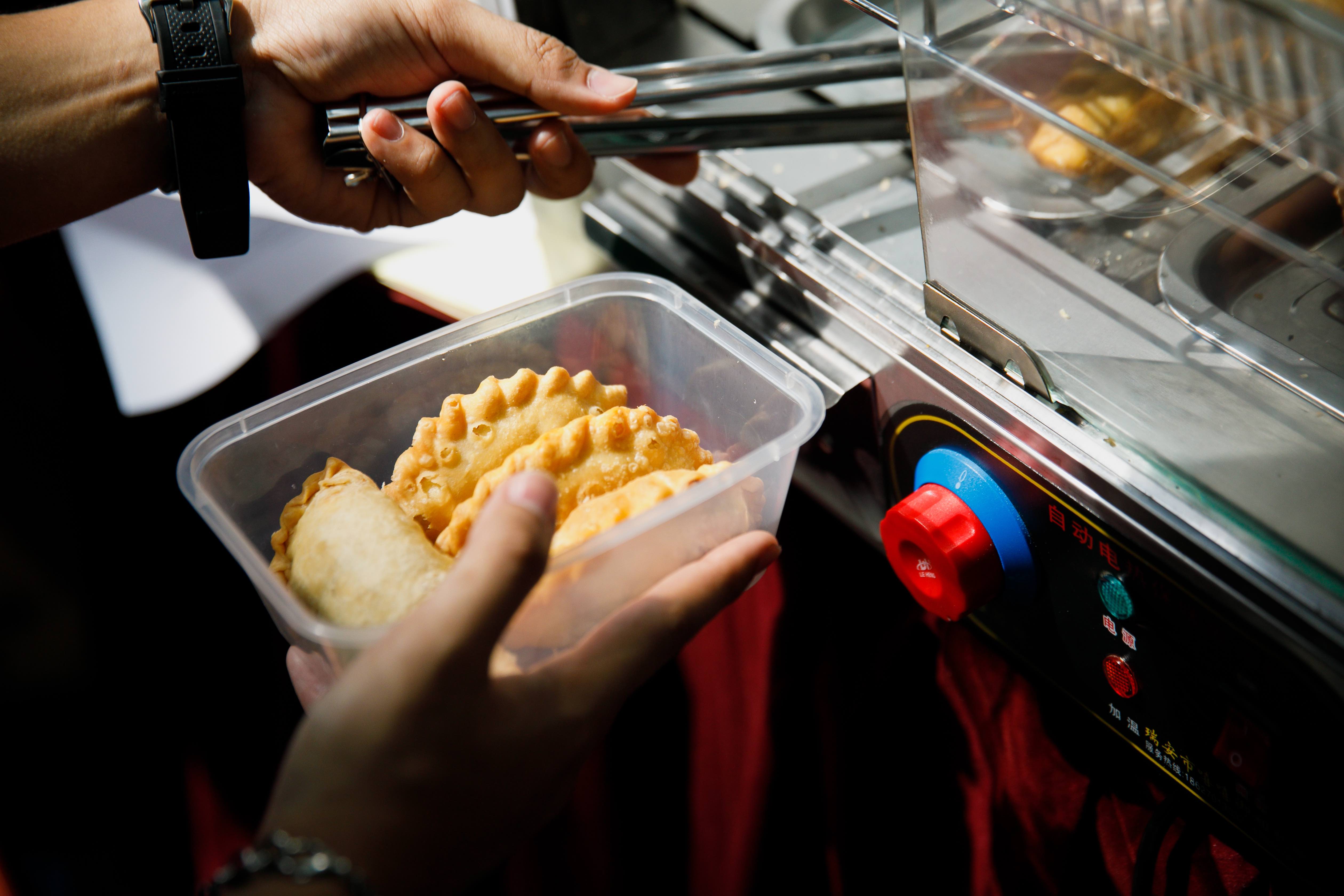 Ever been frustrated with how bread comes bagged in single-use plastics? We feel you. But what can you do about it? This is the story of a girl who decided to take the issue into her own hands and birthed Bread Without Bags, a nationwide campaign in Singapore to get bakeries to do better.

As we reach the end of Plastic Free July, we imagine a lot of you are feeling the reality of the plastic crisis (but also feeling like plastic-free is a little easier now hopefully?). If you’re feeling (or have ever felt) helpless about the unimaginably large plastic problem and wondered how on earth you, one single person, can do something about it, then this is the inspiring story you’ve been waiting for.

Bread bags and how they contribute to the plastic crisis

Singapore goes through at least 1.76 billion plastic items in a single year. That’s almost one plastic item per person per day. While some parts of the crisis are being addressed (Zero Waste SG, for example, with their new supermarket plastic bag campaign), others remain untouched. We still use 467 PET bottles a year and 473 million plastic disposable items, such as takeaway containers. Dismal!

But bread bags, which often go under the radar because they’re so inconspicuous, are part of the problem too.

You know how it goes. You have to have that piece of bread, so you pick one up. But when you get to pay for it, the cashier puts each piece of bread into one piece of plastic. And those bags of bread? Into yet another plastic carrier bag. This might have been phased out in other parts of the world that have already ditched single-use plastics, but not Singapore. Every day, bread continues to get bagged. And nobody has done anything about it, until now.

Introducing Coco Oan, a 21-year-old who started a nationwide campaign called Bread Without Bags with the aim of convincing bakeries and consumers to move towards a plastic-free bread-consuming society together.

The waste crisis: should businesses or consumers move first?

Addressing the waste crisis isn’t so simple, to say the least. Do we tell businesses to just ditch single-use? Or do we start with the consumers, and tell them to start bringing their own reusables? Coco believes that the answer to this chicken-and-egg question is both.

“Bakeries are nervous about charging for bags or packing multiple buns into one bag because they’re afraid of upsetting customers,” she explains. But Coco also believes that bakeries, especially the bigger chains, need to step up their sustainability efforts as well. “Changing consumer behaviour person by person is far too slow for the urgent waste crisis we are facing. The big chains are the ones who have created this convenience (whether it is necessary or excessive is worth examining). Therefore the responsibility lies with them to make effective change.”

How exactly is Bread Without Bags shifting both players in this issue simultaneously? Let’s take a look at some successes from Coco’s campaign thus far.

One girl can change the world!

In the past three months, Coco and her team have garnered the support of 25 bakeries. These include bigger chains like Maison Kayser, Auntie Anne’s and Barcook Bakery. This amounts to 58 outlets nationwide who have committed to #BYO schemes, some even making the discounts permanent instead of just for the month of July.

On the consumer-facing side, Project bECOme (which is the larger umbrella project that this campaign falls under) has also been hosting weekly #breadwithoutbags Instagram challenges. Through social media, they’ve been challenging Singaporeans to bring their own containers to buy bread, with positive responses thus far.

Sounds like a lot already? There’s more. Coco’s campaign culminated in a Bread Without Bags Fair on 20th July, graced by MP Denise Phua, multiple celebrities and influencers, as well as 12 different bakeries and various supporting partners. With 2,000 visitors to the Fair, Project bECOme managed to save over 1,000 single-use bags!

Coco herself is an environmental activist who leads a deeply conscious lifestyle, so she and her team organised a Fair that also reflected this belief. Most impressively, the stage backdrop at the Fair was completely upcycled. It was made by Ripple and the team from styling studio Stitch X Marker with materials collected by Project bECOme. “This festive backdrop was created by weaving plastic bags, crisscrossed strung plastic containers garlands, paperchains, as well as handpainted bread,” said Ripple, who aimed to create a textured backdrop instead of a typical printed one. 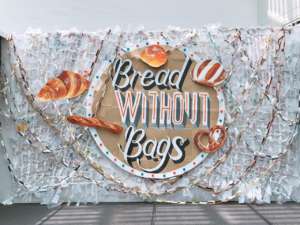 “Aesthetically, Stitch X Marker would rather present a relatively raw form of the materials used,” they added. “Taping up flattened cardboard, we created the perfect canvas to paint bread and the main #BreadWithoutBags sign. We also jazzed it up with bottle caps all around like lightbulbs.”

Additionally, to avoid using single-use plastic, some vendors like Well-Dressed Salad Bar & Cafe also provided their own donated reusable containers, which customers could buy for a small fee. Many of the participating bakeries also provided vegan options, if they weren’t already completely plant-based. Rendang Mama Vegan, who had to restock within the first hour, is one example of a popular local vegan bakery who was at the event.

“We can see that bakery shops nowadays are one of the major sources of plastic waste,” they continued. “So we think this Bread Without Bags Fair is a fantastic initiative to promote lesser waste, towards zero waste.”

But how does one person do it?

The easy answer? They don’t.

Coco started this out of a simple annoyance of seeing plastic bag waste at bakeries. Last September, she organised a two-week #BreadWithoutBags challenge to test the public’s receptiveness to the practice. Encouraged by its success, she scaled the project up to a Bread Without Bags Fair.

“A strong supportive team is indispensable for a campaign of this scale to succeed,” Coco said. “I wouldn’t have been able to make it so far without my 12 super passionate team members.”

“Burnout is also a very real concern as we have many ideas we want to implement, and opportunities often come in waves with little time for us to respond,” she added. “There’ve been many times that I felt overwhelmed and had to call for help. Creating a strong team and managing burnouts are skills I’m still trying to master, but I think I got a little better!” 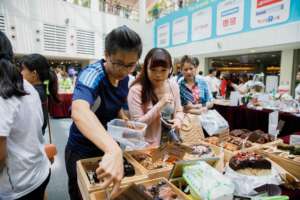 After the event, Coco understood on a deeper level about the constraints of corporations. She learned that “a sponsor may have many other stakeholders’ interests to prioritise, which we have to consider when seeking their support.” Coco also mentioned that each supporting partner may have their own expectations of the mileage they can offer. She suggested clarifying early to avoid misunderstandings.

On organising such events, Coco highlighted that Singaporean corporations’ tolerance for activism may still be lower than they should be. “We need to navigate our way prudently such that we convey our point both firmly and fairly,” she concluded.

As of right now, Project bECOme is still working on the single-use waste crisis. Other initiatives include annual Chinese New Year container donation drives, but they’ve yet to engage larger corporations. Coco believes that larger corporations have a greater impact when it comes to waste, compared to smaller businesses. While this means they are a bigger problem, on the bright side, it also means that they have a huge potential to make things better.