In the States, they call it Black Friday and Cyber Monday. In China, they call it Singles Day. But a rose by any other name would smell as sweet. Capitalism will invent an absurd number of names for retail holidays, as long as we buy more stuff. It’s time we reckoned with the facts: we don’t need more stuff, especially with the exploitation behind it.

“Black Friday” originated in Philadelphia, from around 1961. Police officers used it to describe the heavy traffic that would occur the day after Thanksgiving. Later on, historians note an alternative explanation. Because retailers often operate without financial loss only during the festive season, Black Friday marked the period retailers would no longer be “in the red”. Fast forward to today? 2020’s Black Friday in the States hit a new record with consumers spending $9 billion. That’s a 21.6% year over year increase.

Retail holidays don’t just get people to open their wallets in the States. It’s hit Asia too. For those of us in Asia, you’ve probably seen the advertisements for the November 11th sales, otherwise known as Singles Day. Though it’s all across Asia now, it originated in China. It came about as a day for single people to shop, to console their single relationship status. Now? It’s “transformed instead into a massive shopping orgy”. Even, and more so, for those who aren’t single. 2020’s Singles Day saw Chinese e-commerce giants racking up $115 billion in sales across their platforms, both setting new records.

Behind all the glitz and glamour? These retail holidays represent peak capitalism. And we ought to start reckoning with how exactly they do.

It’s a capitalistic myth that our consumer spending goes back to the economy. And that it’s redistributed where it’s needed. We’re often told that spending money is “good for the economy”. And that’s true. Insofar as it benefits and entrenches our economic system of global capitalism. Which accumulates profits in the hands of a few who sit at the top. Retail holidays are textbook examples of this logic. The numbers of transactions that occur on the platform mean that the biggest winners are not the sellers or makers of the products we consume during retail holidays, but the middlemen.

And because the middlemen are e-commerce giants like Amazon and Alibaba, which are corporations structured in such a way that the workers who prop it up are paid peanuts? Our consumer spending goes to accumulate wealth for the men sitting on top of these corporations. As reported back in 2017, Black Friday’s buzz “sent Amazon stock soaring to record highs.” In fact, Amazon did so well that day that it pushed Jeff Bezos‘ total fortune to over $100 billion. Making him the “first person in the modern era with a known fortune of $100 billion or more.”

And what about what Singles Day has done for Chinese billionaires? Jack Ma, co-founder of Alibaba, takes credit for inventing Singles Day. He’s China’s richest man. And he has the frenzied sales to thank for much of that wealth. How? Not only is Alibaba China’s biggest digital marketplace, but it also rakes in money through the payment-processing service Alipay, and popular Chinese social media site Weibo. All of these subsidiaries reinforce the sales, of course. And ultimately ensure that the spending of people goes back to him.

“Under capitalist control, the resources of our society are mobilised to produce for the markets to generate profits for the owners of businesses, rather than to fulfil human needs.” Exploitation is rampant within these corporations that are at the heart of these retail holidays. In fact, to bring this to light, the #MakeAmazonPay campaign emerged during Black Friday of last year. It uses a striking visual that puts the message plainly across. Amazon is an iceberg, where users and consumers see the glitz and glamour of global shipping, online shopping, and the arrival of their packages.

But behind the trillion-dollar-worth multinational corporation lies a dark reality. “From the factories where the products it sells are made, to the doorsteps where they are delivered, Amazon’s global infrastructure is held together by the exploitation of those who operate it.” That exploitation looks like dangerous and dehumanising work conditions, and anti-union practices to boot. At a recent TED climate conference, when labour rights activist Aditi Mayer asked about unions to Amazon’s Director of EU Sustainability? He said, revealingly, that he is “going to skip that one”. 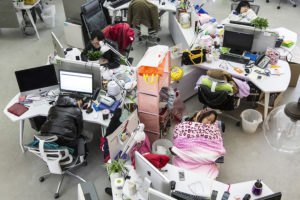 IMAGE: Qilai Shen via The New York Times | IMAGE DESCRIPTION: Employees take naps during lunch hour at Tencent in Guangzhou, China. In the photo are five desks: three employees are taking naps, while one is working at his laptop. On their desks are various objects including calculators, wires, water bottles, tissues, notebooks. In between the desks, there is a pink makeshift shelf, with what appears to be clothes and blankets in one of the cubicles. Two of the employees are taking their naps, wearing thick blankets. It is a scene that draws ire and pity.

Similar sentiments have bubbled up in China, against what’s called the culture of 996. It’s been named as such due to its reference to working 12 hours a day, six days a week. This has become “an unwritten standard for many of the country’s tech firms”. It’s a phenomenon Chinese startups are encouraging implicitly, but it’s also seen in established tech giants. At the height of the debate, Jack Ma weighed in “as one of 996’s staunchest supporters”.

Ma said that the harsh schedule was “a huge blessing that many companies and employees don’t have the opportunity to have”. And that this work ethic was the reason why Chinese tech corporations have grown to their sizes today. To Alibaba employees, he said: “If you join Alibaba, you should get ready to work 12 hours a day, otherwise why do you come to Alibaba? We don’t need those who comfortably work 8 hours.”

No prizes for guessing his stance on worker exploitation.

As author and academic Chad Broughton writes in The Atlantic, the “commercial spectacle we walk through each day” actually “conceals a vast social and economic machinery of production and exchange underneath. This illusion is the commodity fetish,” as Marx would have explained. “When we see that dazzling rows of iPads at the Apple store, we do not see all the tinkering, gluing, and assembling that young women did at the Foxconn factory in Shenzhen, China. At the coffee shop, we don’t see the Mexican campesino who harvested the beans, or the truckers who hauled the green coffee north in sisal bags.”

“Even if we know how a product came about,” he writes, “it’s nearly impossible to experience these relationships in a meaningful way.” He’s right. And these online retail holidays make the alienation of us from those who make these products, or who make the consumption of these products possible, run even deeper. Notorious for labour exploitation, these retail holidays are killing us too. As writer, content creator, and podcaster Maggie Zhou shared with Green Is The New Black: “When something is being made is rooted in exploitation, I don’t think the end product can cause true happiness.”

So what should we do about it? Zhou pointed to the fact that guilting fellow consumers isn’t the way to go. “It is so difficult to live completely ethically. It can be very overwhelming for people—it’s a big, hard pill to swallow, that your own consumption is at the detriment of exploited workers.”

To borrow from Donna Haraway, perhaps what we need to do is to stay with the trouble.

Staying with the trouble

Everything that we buy in this globalised capitalist system is going to be unethical in one way or another. We have to recognise that, but also not paralyse ourselves into inaction because of this.

As was written by Strike MoMA, a movement to strike the Museum of Modern Art in New York City: “We can see contradictions as impediments and be consumed by frustration, ambivalence, and despair, or we can acknowledge and heighten them. Quiet forms of subversion, deep conversations, mobilizations, large and small: each act we take further undermines the principles that sustain this system.” This offers some wisdom in thinking about what we can do about retail holidays, that heighten these contradictions.

Realising that more stuff doesn’t make us happy is a start. Realising that all this stuff is being produced within a system that exploits working class communities everywhere is the next step. Then comes sitting with that reality. It’s not just about drawing up more ethical shopping lists. Nor is it just about supporting local, independent brands. Zhou added, “at the end of the day, consumption is rooted in capitalism. And I don’t think that’s doing us any good.”

It’s a messy, complex world we live in. Late-stage capitalism means that the answer is often contradictory. This means that as retail holiday season rolls around, the best we can do is avoid consuming what we don’t need, to start. Then we can think about how we can leverage our voices and platforms. We should speak truth to power about our global supply chains and the exploitation embedded within them. And support labour rights activists, movements and organisations in whatever way possible. It might not feel like it matters.

But each action does subvert the logic of this system. We owe it to each other to try.

FEATURED IMAGE: Justin Lim via Unsplash | IMAGE DESCRIPTION: A huge sign is lit from behind, with the word “SALE” in white on a red background. There is someone walking behind the sign, but all we see is their blurry silhouette.