Ecocide And Epidemics On Easter Island: Rebuilding A Society 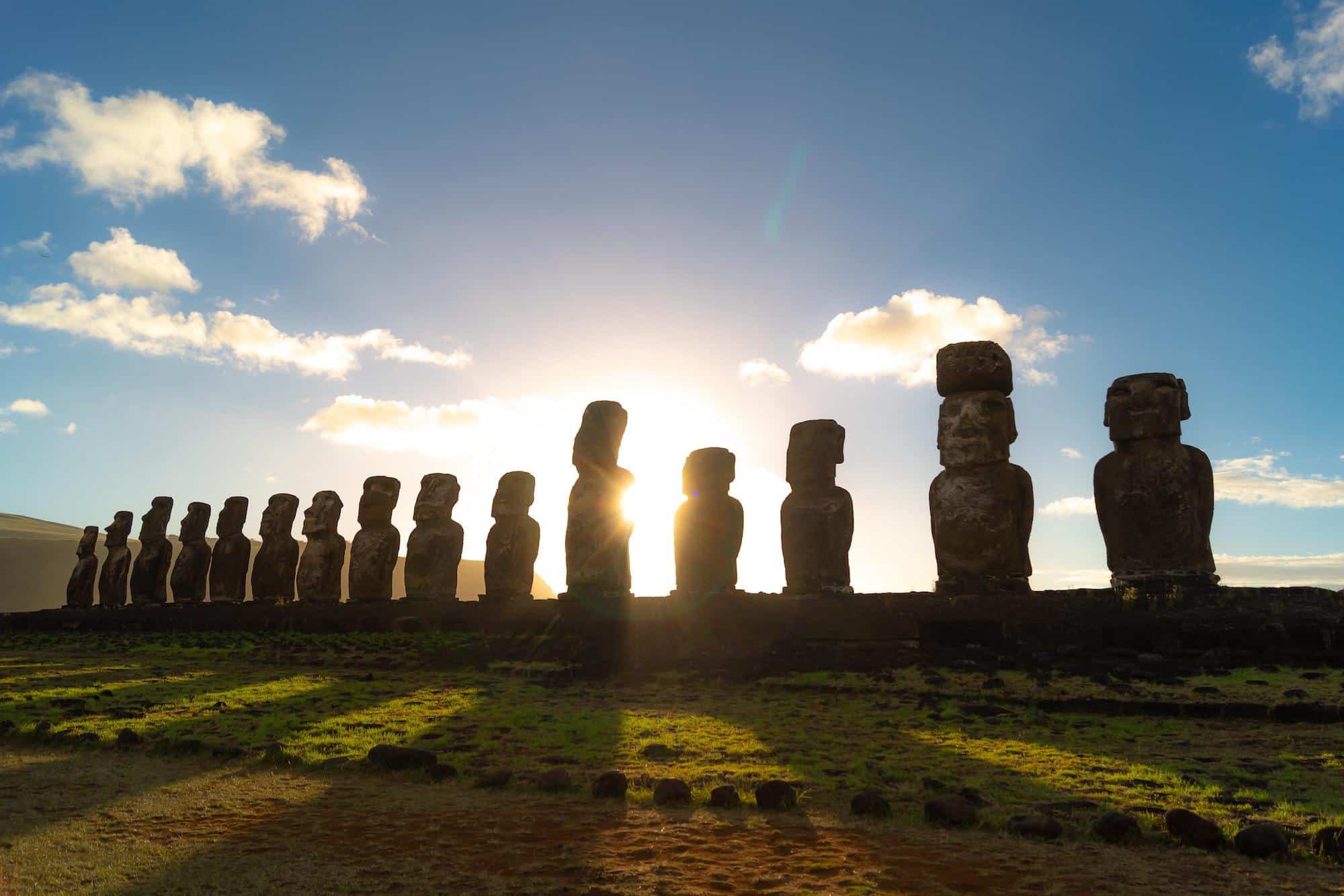 As lockdowns continue across the world, Hannah Nicholl reminisces about a recent trip to Easter Island, one of the most isolated communities on Earth. A hundred years ago, the society was almost wiped out by a virus but has come back stronger than ever.

“Like countless other people, my travel plans were abruptly cut short this year. One day I was sunning myself on a beach in Colombia, the next I was facing a military lockdown as the ‘rona hit Latin America like a tidal wave. Thankfully, I was able to jump on a flight out. Forty hours of travel later, I went into isolation with a dozen cans of beans and a sourdough starter kit.

For those of us in developed countries, the spread of this new virus has been a shock to the system. It feels like we’ve regressed to an age where modern medicine can’t help us. Bubonic plague, sweating sickness, Spanish flu – the history lessons that we assumed we wouldn’t need to remember have become seemingly more relevant. What herbs ward off viruses? Will wearing onions around my neck stop me getting COVID-19? Before my mad dash out of South America, I found myself thinking about plagues quite a lot. This is the continent where the viruses and bacteria of old had the deadliest effect. It’s estimated that around 90% of the indigenous people of the Americas were killed by viruses like smallpox and flu brought over by the European settlers. Whole civilizations destroyed by microscopic pathogens.

Remoteness didn’t protect people, as I found out when I visited Easter Island, or Rapa Nui, in February. It’s one of the most isolated islands on earth, a ‘special territory’ of Chile, situated over 3,500 kilometres from the west coast of South America. At one point, it had a large society who built huge stone statues, or Moai, that are still scattered around the coastline. Slave raids in the 1800s carried off half of the inhabitants, and when twelve of these freed slaves were finally able to return home, they brought with them new illnesses that reduced the population to a meagre 100 people. How does a society come back from that kind of trauma?

Welcome to the middle of nowhere

Big statues and depopulation. That’s all I really knew about Rapa Nui before I arrived. My first impression of the island was from the air – a windswept collection of round hills and craggy coastlines shaped like a huge, green croissant dropped in the middle of the Pacific Ocean. The mounds are the remains of former volcanoes that forced the land out of the sea millions of years ago, creating wonderfully fertile soil. It wasn’t quite as bleak as I’d expected. 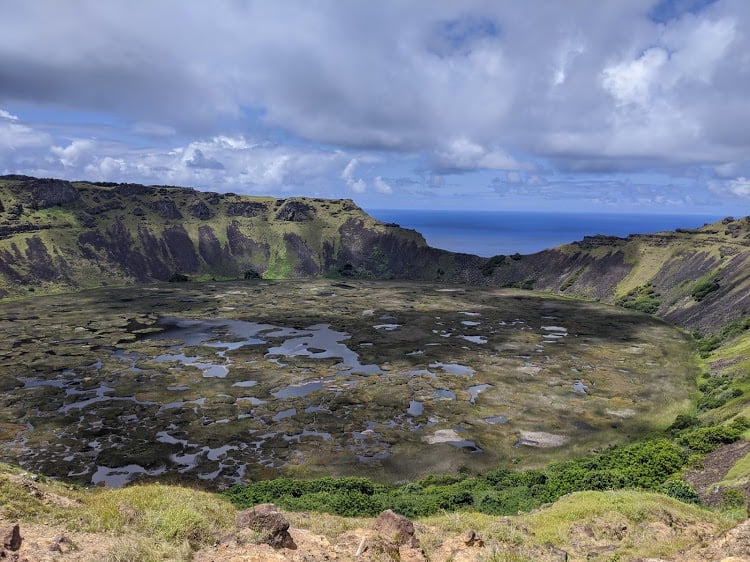 Rano Kau, one of of the volcanoes on the island

As I walked across the tarmac and into the tiny arrivals lounge, I spotted palm trees and hibiscus flowers. Someone put a lay round my neck while a topless man played the ukulele next to baggage reclaim. I was starting to like the island.

I spent the next few days properly acquainting myself with Rapa Nui’s history. Its original inhabitants were Polynesians, and the culture certainly has far more in common with the likes of Hawaii than Chile. The settlers arrived in around 800AD and developed their entire civilization cut off from the rest of the world.

The Rapanui people cultivated the land. They built allotments with stone walls to protect the plants inside from the wind. And climbed volcanos to collect drinking water from the craters. They built canoes out of trees and fished in the surrounding sea, and planted vegetables in the cool caverns formed by ancient lava flows, creating natural greenhouses. By around 1500AD the population had swollen to around 18,000 people – pretty big considering Rapa Nui is only 25 kilometres from one end to the other. 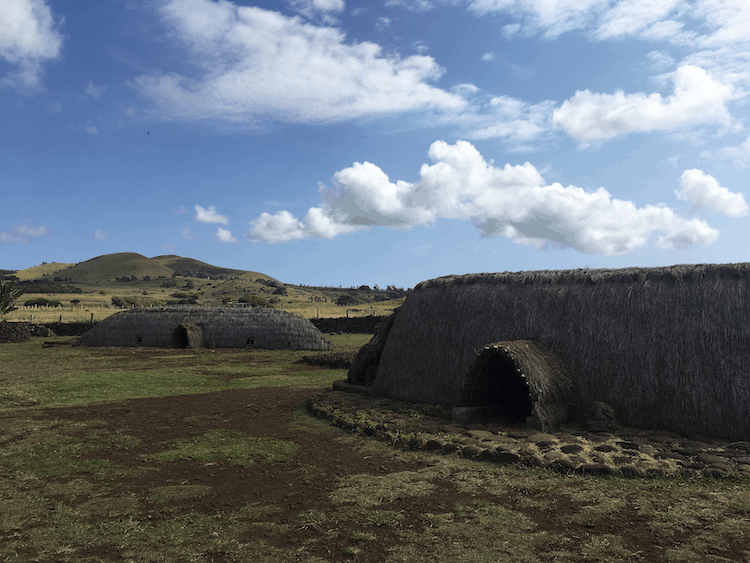 A reconstruction of the longhouses built by original inhabitants

I rented a car and drove around the coast, stopping wherever I saw the towering heads of the Moai statues. There are over 800 of them on the island, and thanks to all of the well-kept signs (40% of the island is a national park), I learnt that these Moai represented ancient leaders. The people believed that the statues’ mana, or life energy, would bless them with plentiful food and good luck. They were so important that some estimates say that at one point all of the young men on the island aged between 10 and 20 were involved in moai carving, all year round.

But this is where it starts to become a bit more complicated. I’d assumed the population decline was a similar story to that of other native communities in South America – a sad tale of colonisation, slavery and germs. But in fact, there were other underlying issues bubbling under the surface before any foreigners stepped foot on the island.

Returning from the brink

In a way, the islanders were too successful. Their population grew to an unsustainable size and the tribes started to squabble over resources and land as there simply wasn’t enough to go round. Some archaeologists believe that ecocide – the human destruction of the environment – was partly to blame. Deforestation for agriculture and Moai-making led to soil erosion that impacted farming. Others believe that Polynesian rats brought to the island by the original settlers nibbled away at roots and seeds, killing the trees and meaning there was not enough lumber to build canoes. Another theory goes that people were so fixated on creating the Moai that they simply didn’t have enough manpower for agriculture or fishing. 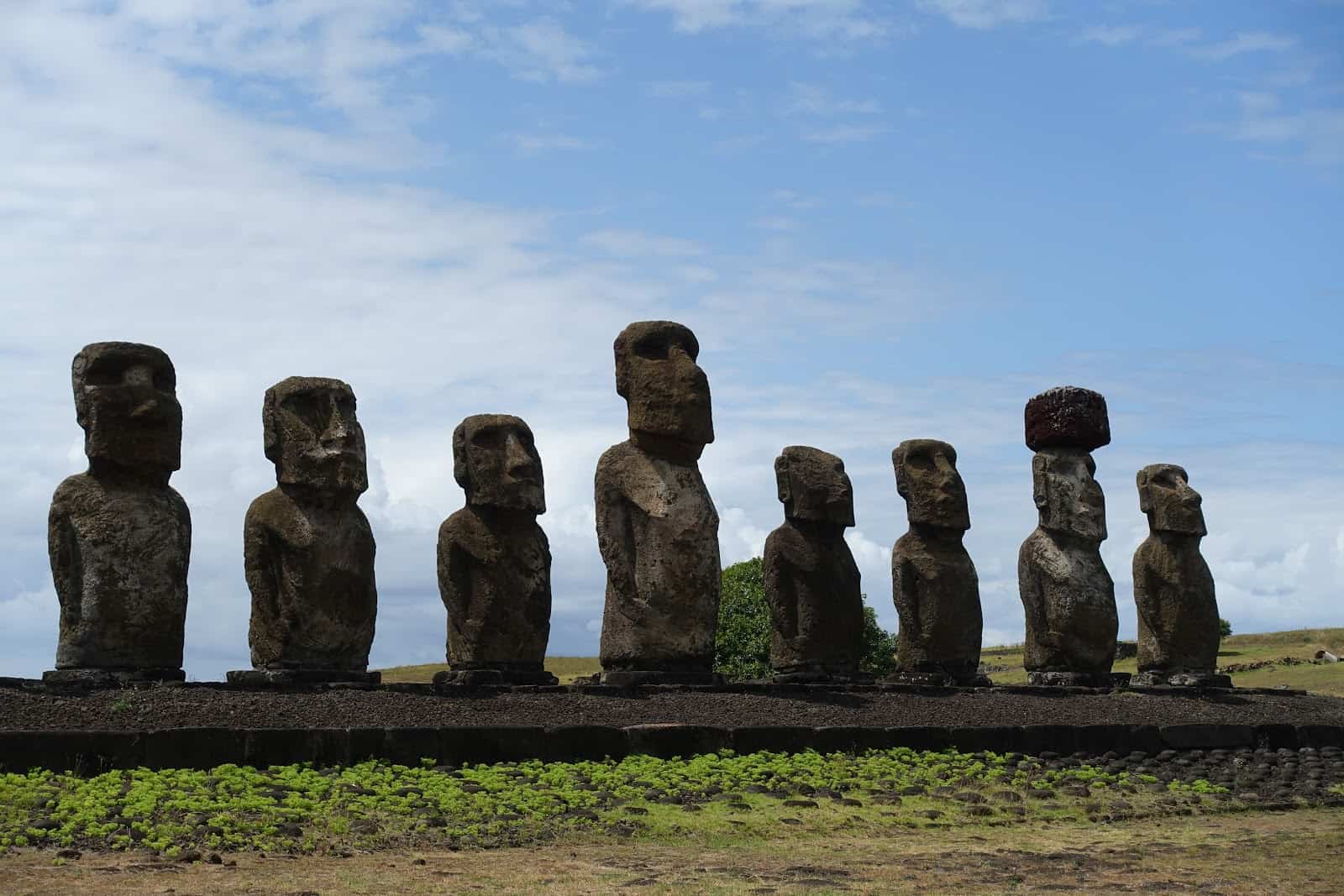 The huge Moai statues that are scattered across the island

It was probably a combination of factors. In any case, people stopped farming and started fighting. Political instability, division and violence became the new norm. As a result, Rapa Nui’s society was already fragile by the time the Europeans arrived. The epidemic was the final straw.

But against all odds, the Rapanuians came back from the brink. Today the island’s population is around 8,000, with about half claiming native heritage. Chilean immigration bolstered the figure, and a colourful and thriving community now lives in the main town of Hanga Roa. I was there for the annual Tepati festival, a two-week celebration of Rapa Nui and its culture. There were dances, musical performances and sporting events. My favourite was one which involved people tobogganing down the grassy side of a volcano on a large banana leaf, reaching terrifying speeds of 50kmph.

Rebuilding and hope for the future

I’ve spent quite a while thinking about my time in Easter Island and the rise and fall of the Rapanui: food supply issues, deforestation, (colonial) globalisation, separation and homecomings, and then a virus to top it all off. It seems a lot easier to relate to in the age of COVID-19.

As I learnt back in February, the causes of seismic changes are never simple. It’s hard to place the blame on any one factor and dust your hands of the issue. ‘There you go – it was the rats. Solved it’. Easter Island is not a microcosm of the world, and fretting over its history will not give us any more insight into what is happening in 2020. However, it does provide a look at how a society repaired itself after all of the trauma.

The people focused on rebuilding their community and finding the shared values that had made them so strong and successful originally. They took what they liked and discarded what they didn’t. Complex hierarchical structure where only the priests learn to read: no thank you. Community traditions, songs and games: yes, please.” The importance of sustainability

They’ve not shied away from analysing what went wrong and using that insight to put things right. There is a huge focus on sustainability and reducing their dependence on mainland Chile. In 2014, the island declared a 20-year plan to become self-sustainable and waste-free. The plan involves a focus on preserving natural resources, providing environmental education to children, and an island-wide campaign to show people how to reuse, recycle, and create their own vegetable gardens.

As I walked around Hanga Roa I saw lots of colourful posters encouraging people to come along to beach clean-ups or to join local gardening groups. Billboards explain how they are fighting erosion by reforesting parts of the island with hundreds of trees. There are no international fast-food franchises as most of the restaurants are locally-owned. They’re also carefully limiting tourism and monitoring the population figures to ensure they don’t find themselves in another unsustainable situation.

There is an awareness of how close they came to losing everything, and a focus on preserving what they do have for the future. This no doubt helped when coronavirus arrived less than a month after my visit. Rapa Nui went into lockdown when the first positive case on the island appeared – a week before the rest of Chile. Given their history, it’s no wonder they’re cautious.

They’re also turning to old traditions such as tapu, a Polynesian tradition of self-care, sustainability and respect. Lockdown rules have been diligently respected, preventing the spread of the virus in the community. They’ve started planting food and fishing, in case the supplies from the mainland run out. With an economy based on tourism, there’s still a lot of uncertainty about the future, but they are focusing on the actions that will help the community survive.

Looking to the future

Archaeologists are still arguing about what caused the original population decline on Rapa Nui centuries ago. And today, experts are now arguing about the causes of Coronavirus. They’ll probably be arguing about it for years to come. But we don’t need a definite answer to move forward. It’s a collection of many factors. Destroying our environment, cutting down forests, unsustainable food systems. And underneath these tangible causes are the more insidious reasons. Mistrust, broken politics, rampant globalisation. For those of us lucky enough to be warm, well-fed and comfortable during the lockdown, it’s been a good opportunity to focus on ourselves as individuals. But once this is all over, what will unite us? What parts of our society can we agree to leave in the past?