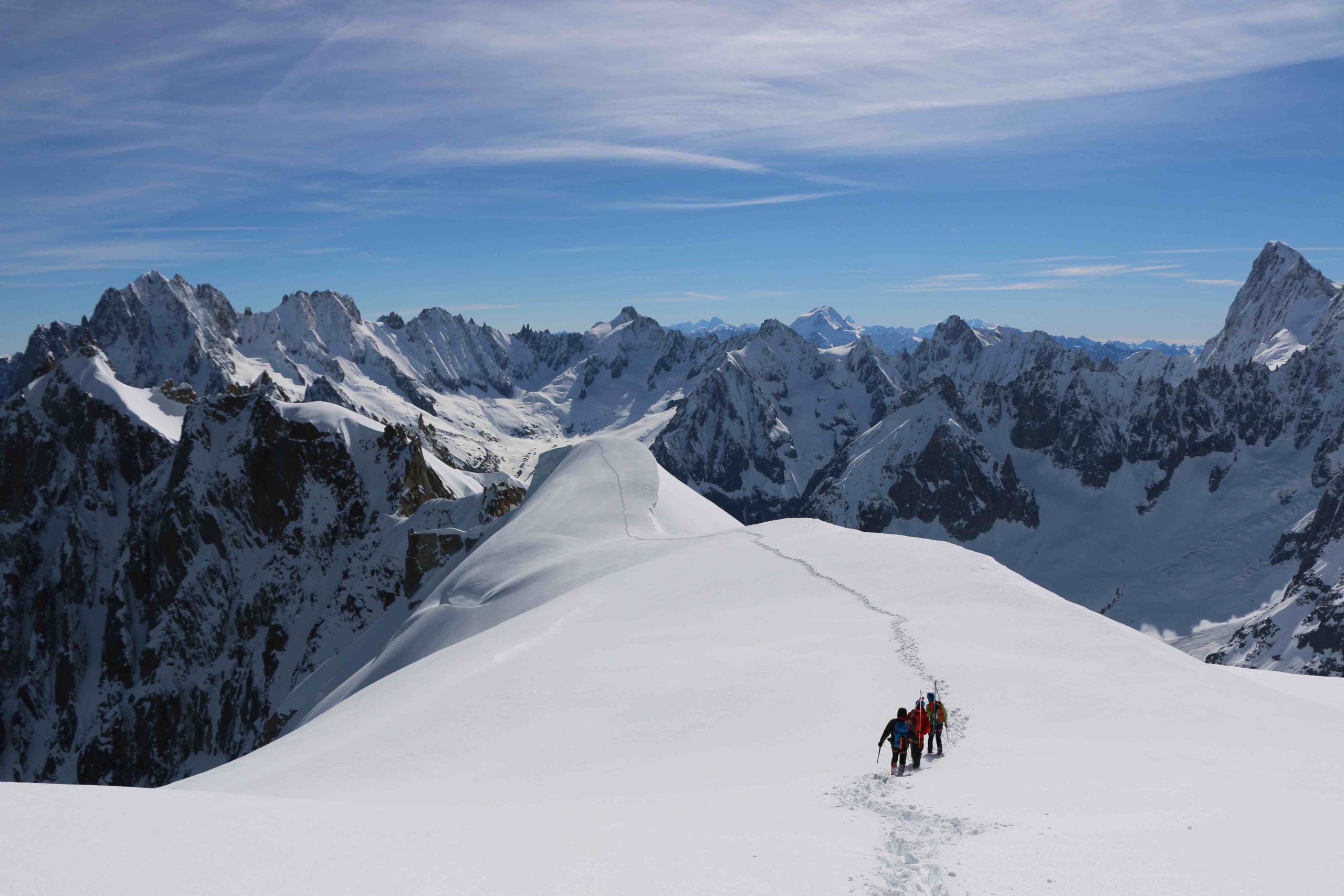 How can the hospitality industry transform and tackle its environmental problems? Why are climate change scientists not taken seriously? And have we past the tipping point of no return? We speak to Malcolm Wood & Matt Reid serial entrepreneurs, environmental filmmakers & producers, restauranteurs, and long time business partners.

Malcolm Wood and Matt Reid are long time business partners who work across hospitality, environmentalism, wellness and content production. Including Steelhead Group, Maximal Concepts and Disruption Labs. As restauranteurs over the years, Malcolm and Matt have had a little more awareness of what’s going on with the planet, especially when it comes to products. It has been an educational process for them that has included supporting sustainable farming, ethical sourcing, localising supply chains as much as possible and having more vegetarian driven menus.

When Craig Leeson showed them both 10-minutes of his film ‘A Plastic Ocean‘, they had a trigger moment where they knew they had to do more and joined as producers for the documentary. This led them to be heavily involved and champion for the non-profits Plastic Ocean, HK Shark Foundation, Plastic Conscious among others. Malcolm is also a United Nations Environments Mountain Hero. And they went back for more with Craig to produce the upcoming documentary ‘The Last Glaciers‘.

We spoke to them on the Live Wide Awake podcast (click to listen) and shared a few key highlights here. We talk about transforming the hospitality industry from the inside out, and the importance of acting now in the face of the damage that has already been done. 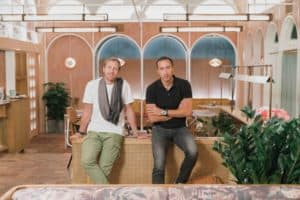 On Plastic Conscious for hospitality…

We were given the privilege of seeing some of the footage and research for A Plastic Ocean (as it was being made) and thought there was just no way we cannot act, even as a business, even if it’s going to hurt our bottom line. So we back to the drawing board and decided we’ve got to eliminate single-use plastic as much as we can. We got it down to about 99% in front of house. But the back of house is where there’s a serious problem in the hospitality industry. We realised that unless you can innovate the packaging, there’s no way it’s going to change. And that was the reason why we came up with Plastic Conscious. We wanted to change the industry and curated plastic-free and sustainable products to tackle this big challenge. Not only have we been researching and testing solutions from around the world, but we’ve also been trying to build innovative financing solutions to enable companies to make that transition. And we run it as a non-profit so that we can funnel revenues that we generate back into the change. You have to get more and more people involved in order to bring down the capital cost and make it affordable for those that can’t currently do it.

On A Plastic Ocean…

Films can be super powerful and great tools for driving home a message. A Plastic Ocean blew up and we weren’t expecting it. It changed a lot of people’s opinion on their daily routine, their shopping, what they did when they went to restaurants, and it changed business owners. It was picked up by schools all around the world, by banks at sustainability conferences. We saw the power of what a film can do. Now more people are educated, more people have watched the film and other films, we’re seeing that the cost is becoming less important, with the environment becoming more important in people’s minds and helping them to make the switch.

On the bigger problem…

After that film, I turned to Craig and I said, “Look, we’ve got an even bigger problem in front of us and that’s climate change and I’ve got three kids and I’m petrified for them. Let’s tackle that problem.” Four years of filming later, we have The Last Glaciers documentary. We knew that education was the most powerful thing and that if we could get young adults and children behind the idea of climate change, we could make a bigger impact. We realised, especially with the Greta movement and student protests, that we wanted to explain climate change in a way that people could simply understand it. The issue was we didn’t really understand it. And there was this debate four years ago, where 50% of the US population thought it was a hoax. It was that crazy. And so we wanted to use glaciers simply as an indication that the whole planet is heating up and that they are melting. It was a huge learning cure and through this process we filmed in Antarctica with NASA, Craig became the ambassador for sustainability for BNP Paribas, I became an ambassador for climate change and mountains for the United Nations.

On why glaciers are so important…

Halfway through the film, we realised that the loss of glaciers was going to be one of humanity’s biggest fallouts of climate change. Glaciers are the water reservoirs around the world and they supply water to a third of the world’s population. As we lose them, we’re going to see mass migration of people around the world, moving to places where there will be water. We’re going to see mass loss of agriculture. It’s going to be one of the biggest, fastest effects of climate change that we will see in our generation. The damage that we’ve done up to now to the glaciers, and the drought that will follow because of it, is very difficult, if not impossible to reverse. We can slow it down but we can’t reverse it. The damage has been done, but we need to act now to slow the effects down. If we can do that, then populations won’t have to move so rapidly in such a short period of time. And that’s really the key, because if this has to happen over 40 years, with over 3 billion people having to move around the world, it’s going to be incredibly difficult to cope with. But if we can slow that down to a 200-300 year process and then slow down some of that damage, then we can deal with it. 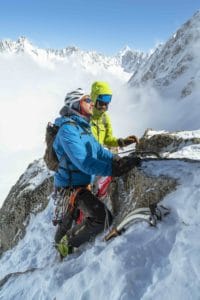 On extreme filming via paragliding…

I’ve always been very passionate about flying in extreme ways. We used paragliders to do our filming. We realised that flying paragliders was a very carbon neutral way of filming because we weren’t using helicopters and we could get up to 6,000 meters, fly down to film and document the glaciers. I actually filmed with Craig in tandem. The film is as much an adventure story as is it a climate change story. Those who work in adventure, are so focused on their craft, they are possibly the most honest people in the world. They’re also incredibly integrated with the nature with which they play on. And we wanted to bring that adventure and journey to life in the film. Extreme sports is one of the biggest risk management games. If you’re not good at analysis and you don’t know when to back down, you’re practising the sport dangerously. If you’re making the right decisions, you can practice the sport in a very safe manner. And so it’s very similar to being an entrepreneur. It’s an obsession that requires a lot of skills, analysis and problem solving, which seems to be something I like to do across the board.

On what’s scarier than flying off the mountain…

More scary than flying off a mountain is hearing scientists say they don’t understand why they’re not being taken seriously. They don’t understand why the population hasn’t got the message. They don’t understand why the politicians are not listening. They are getting emotional and scientists do not get emotional. They are very factual people. They told us that we are facing our extinction and that if we don’t fix things soon, we’re not going to be able to fix it. If you think about how quickly we evolved the speed of computers, it reminds us that innovation can come very fast. But we need everyone to change this – between innovation and the energy of youth and the power of governments and companies making better decisions. I believe that the next generation is much more aware of this than ours, but that doesn’t give an excuse to our generation to sit back and wait until that happens. If people didn’t wake up before with scientific fact, now they have to wake up with the consequences. Why are our children having to take to the streets to deal with our mess, to force us to change so that they have a future? It’s just really screwed up.

We still need to act whether or not it’s too late for certain parts of the world. We shouldn’t think that action can’t solve the problem. When it feels very helpless or it feels very depressing or almost oppressive, I think of the next generation. To me is the most important thing with this whole issue is you can’t sit there and say, “well, it’s too big, and I can’t do anything as an individual”. Every little bit helps. If you localize the products that you’re buying, if you eat more green food and less meat, you are already making a difference. And if more people do that and more people are armed with the information that their actions are helping, then we’re slowing down the process so that everyone else can catch up. At the very least, I hope our film helps to slow down the problem, so that it’s not as big as what we will have to deal with in the next 10 years, but we are still going to have to deal with it.

Three things I’m taking from this conversation with Malcolm and Matt:

1. When it comes to climate change, scientists are starting to get emotional because they are worried about what is to come and are not being taken seriously. We need to back the science and spread it as much as we can.

2, We’re past the tipping point and will now be facing more and more consequences. But this is no reason to sit back and wait for it to happen. Inaction is not okay at this stage.

3. Remember to be present, give yourself space so that you can give more to the fight. Disconnect from online and reconnect with nature.

Listen to the whole conversation with Malcolm and Matt on the Live Wide Awake podcast.

Stephanie is the founder of Green Is The New Black. She is a marketer, event organiser and avid connector of conscious individuals and brands. She loves bringing people together to connect, find inspiration, gain knowledge and be able to take action to create a better life.