In a first-of-its-kind move for the tech industry, Vikas Garg, CEO and Founder of abillion, announced that the company will be offering all of their users the opportunity to be given equity. This is unparalleled. How is abillion disrupting social media and the future of wealth distribution? And how does it compare with other Big Tech industries? Let’s get down to the nitty-gritty.

abillion is the world’s fastest-growing social network for conscious consumers. It’s an ecosystem where consumers are able to share reviews and information, with every member posting a review on the app receiving $1 back to then donate to some of the world’s most impactful organisations.

With the help of a community of 1 million (and counting!) members spanning over 160 countries, this user-generated, plant-based app now has over 1.4 million reviews of sustainable products, tagging over 140,000 businesses around the world.

The social platform is on a mission to help drive the plant-based movement for a sustainable planet and convert a billion people to a more eco-friendly lifestyle. This young startup is one of the most well-funded in the Asian impact scene.

abillion was founded by Garg, in 2017, with the app launching in 2018. Garg has raised a total of US$17 million to fund the company, including a US$10m Series A (Series A financing is one of the stages in the process of a startup to ensure its continued growth. Through this, the company secures capital from investors by selling the company’s shares.) in December 2021.

Vikas shares his motivation: “My goal from the first day I enrolled in coding boot camp, and still my goal today, is to use technology to make the world a better place for people, for animals and for nature. We’ve built a global community committed to making sustainable and ethical choices plentiful and mainstream. Through abillion, these change-makers are sharing their thoughts, dreams, fears, opinions and ideas, bringing them closer together and their impact more widespread.”

Four years in, the community has grown past a million people worldwide. In 2022, abillion will be launching the world’s first peer-to-peer marketplace fostering entrepreneurship in sustainability on a global scale. “But as we grow, something has begun to eat at me,” he says, “And that’s the disparity of ownership and control between the technology industry and the people responsible for driving their businesses to success.”

Since 2018, abillion has run a unique and successful rewards program. Every time a member chooses to eat or shop sustainably and shares their experiences on the app, abillion credits them US$1. Members cannot withdraw the funds from their wallets but are able to use the credits to donate to any of the 60 plus non-profit organizations supported by the company. For the past 3 years, they’ve been funding donations to animal sanctuaries and conservation groups around the world. The company supports animal welfare projects from Argentina to Australia, and international organizations like Sea Shepherd and One Tree Planted. Through this program, abillion has donated over US$1.4 million. The program creates a direct link between consumer choices and the impact of those choices on the natural environment.

Through the new Community Equity Program, members can now use their donation credits to own a stake in abillion. Each dollar will convert to a dollar’s worth of shares when the company goes public. Of course, they can still donate as much as they’d like to any of the causes the company supports!

Founder and CEO Vikas Garg notes, “We’re uniquely positioned as a social media and technology company that’s built around shared values that extend beyond our staff and offices and embody the values of our members. As a community built around a mission, we want to break the mould of Silicon Valley founders that own and control companies without bearing any responsibility to their users and society at large.”

Members will now see an “abillion Community Equity” badge alongside the 60 plus charities the company supports. To participate in the equity program, abillion members click on the icon and allocate credits to ownership. In doing so, they are promised the amount in shares upon the company’s IPO (more on this soon!) 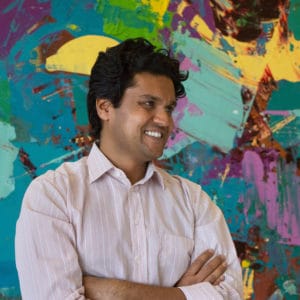 IMAGE: via abillion | IMAGE DESCRIPTION: headshot of Vikas Garg, who is posing against a painted backdrop with his arms folded, smiling but looking away from the camera.

HOW IT WORKS: SHARES AND BILLIONAIRES

How do IPOs work?

IPO stands for Initial Public Offering. It’s the very first sale of a stock issued by a company which essentially means you’re turning your private company into a public one. So, when it’s a private company, it’s normally owned by a small number of investors (that could consist of people like the founder, their friends or family, plus professional investors). Once the company goes public, you’re opening up that business to be owned by a large number of people. In effect, the firm goes from being owned by just a few people to so many more users/members (shareholders).

So why go public?

Well, going public raises a lot of cash for the company. With that money, it becomes easier to scale and grow. (Large companies can choose to stay private.) As an example, Facebook isn’t private: in 2012, it became a company where anyone can buy its shares on the stock market.

The difference, however, is that abillion’s shares don’t need to be “bought”. They are guaranteed as part of the review reward system. The community that is helping to build the app isn’t expected to further invest in stocks; members are promised their dollars’ worth of shares *when* abillion goes public. After that, the goal of a company going public is to sell shares to the public for more than it paid the company. That is, after all, how they make their money.

Some may ask: does this mean that abillion is channelling funds away from the impactful partners they donate to? Not really. This will supercharge the donation program because a move like this will scale up the community and magnify the combined impact many times over. The more members they have, the bigger the donation pool can be, and the more animals, nature and people will benefit. It adds a loop that gets more people eating more vegan food, more people going vegan, and more people helping to donate a lot more.

It means millions of vegan dishes and products will be purchased and reviewed by the community, supporting and enabling sustainable businesses around the world. So, this program isn’t driving money away from the incredible non-profits, but offering members a new and very direct way to feel connected with this company.

Can you be a billionaire even after your company goes public?

The short answer is yes. Because decentralisation, in itself, isn’t a stand-alone solution. As we’ve seen, when a company goes public, it grows exponentially, which means it needs checks and balances in place to restore power and redistribute wealth. Take the example of Evan Speigel, founder of Snapchat. When Snapchat went public in 2017, its founder scored big. He got a grant of $636 million. A few of the biggest IPOs in history include Facebook, Visa and General Motors. One look at this article by Forbes Featuring the Ten New Billionaires from IPOs in 2021 will reveal the sheer number of people who have become billionaires during the pandemic, all thanks to the old-fashioned IPOs.

Vikas Garg rightfully observes: “What do the names Mark Zuckerberg, Jack Dorsey, Zhang Yiming, and Evan Spiegel have in common? They’re billionaires that take no responsibility for what happens on their platforms. Powered by scalable internet technologies, these tech founders own and control platforms whose success has largely been thanks to the work put in by their users. The wealth produced by their businesses has been mostly kept by the founders and a small crew of insiders and investors. Moreover, all of these companies take no responsibility for the damage their platforms have done, everything from spreading hate, violence and misinformation to helping dictators and disrupting elections.”

“abillion is not going to be like that. The only billion we want is the number of people caring for the planet. We’ve created a community that looks out for each other as much as we look out for the animals and the planet.” And so abillion is announcing their Community Equity Program. They’re building a company that champions veganism, sustainability and social impact.

While most of the content on abillion focuses on animal welfare, climate change, and food security, sustainability is not just about nature. It’s also about financial sustainability. Vikas shares: “To be a truly sustainable company, we must nurture our community. So we’re becoming the first and only social media platform in the world where our community is being given a stake in the future we’re all working so hard together to create.”

Vikas hopes that in the years to come, they’re able to grow even more: “We’re a million strong, which is still amazing to me. But given the sheer number of people there are in the world, given the number of people that I know are keen to make responsible and ethical consumer choices, we’re still far from what I know the community can be. So if anything I have written here resonates with you, join us. And be, and own, a part of what I really hope is a completely different company than you’ve ever come across. And discover a community that I know you will love getting to know.”

As we’ve seen in the case of Facebook, Snapchat and other big companies, technical decentralization (through IPOs/shares) does not necessarily lead to political decentralisation of power. Without a system that explicitly seeks to serve the people/environment while challenging corporate power, decentralization can be symbolic at best—used as tokenistic aid to gain points.

Without better organizing, old power has more resources to position for better exploitation of the new mediums. abillion is putting the social media/tech world on a more just path. The company is de-commodifying our online interactions and reorienting our networks toward greener purposes. Together with abillion, we (the consumers/members/shareholders) need to build a better internet and demand more of other companies that continue to hoard power and control.

FEATURED IMAGE: via abillion | IMAGE DESCRIPTON: image of a person holding an iPhone, with the screen facing the camera, a Beyond Meat burger review on display. In the background, unfocused items on a wooden board.