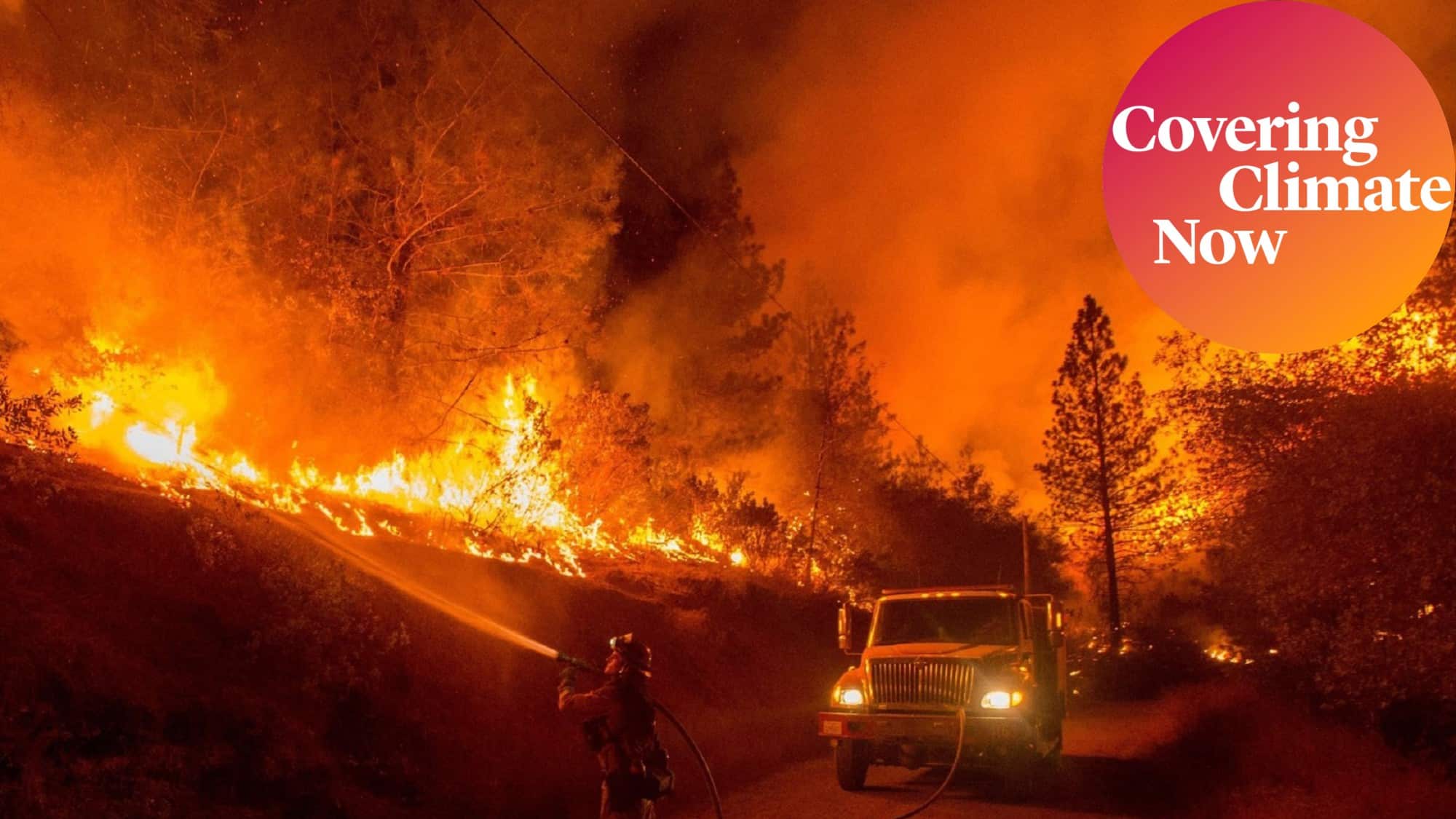 Right on the heels of arguably the West Coast’s most intense heat wave in modern history comes the most ferocious flare-up of catastrophic wildfires in recent memory. Meanwhile, just a few hundred miles east, a 60-degree temperature drop over just 18 hours in Wyoming and Colorado was accompanied by an extremely rare late-summer dumping of up to 2 feet of snow.

These kinds of dystopian weather events, happening often at the same time, are exactly what scientists have been warning about for decades. While extreme weather is a part of the natural cycle, the recent uptick in the ferocity and frequency of these extremes, scientists say, is evidence of an acceleration of climate impacts, some of which were underestimated by climate computer models.

“This is yet another example of where uncertainty is not our friend,” says Michael Mann, distinguished professor of atmospheric science at Penn State. “As we learn more, we are finding that many climate change impacts, including these sorts of extreme weather events, are playing out faster and with greater magnitude than our models predicted.”

On Wednesday NOAA released its latest State of the Climate Report, which finds that just during the month of August the U.S. was hit by four different billion-dollar disasters: two hurricanes, huge wildfires and an extraordinary Midwest derecho.

Just one such extreme event can strain emergency resources — a situation West Coast firefighters find themselves in now. However, in two dramatic cases this summer, the nation was hit simultaneously with concurrent catastrophes, some of which had no precedent in modern history. It’s a concept scientists call compound events, and it is necessary to factor these confluences into future projections to properly estimate risk, response and resources.

In mid-August the West suffered through an extended heat wave which saw Death Valley surge to 130 degrees, the hottest temperature ever reliably measured on Earth. The tinderbox conditions caused by the heat, along with a rare lightning outbreak, sparked the first round of major wildfires in California this season, escalating into three of the four largest fires in state history. At about the same time a powerful derecho caused billions of dollars in damage in Iowa and Illinois, and Hurricane Laura plowed into the Gulf Coast of Louisiana as a Category 4 with 150 mph winds and 16 feet of storm surge.

Just three weeks later, and here we are again. This past weekend California experienced an even more intense heat wave, with the southern part of the state hitting 121 degrees west of the mountains for the first time in record-keeping history. Predictably, fires flared back up due to the severe heating and drying, and then went into overdrive as a wicked early-season cold front — which is also bringing heavy snow to the Rockies — brought a wind event through the mountains and valleys of the intermountain west. 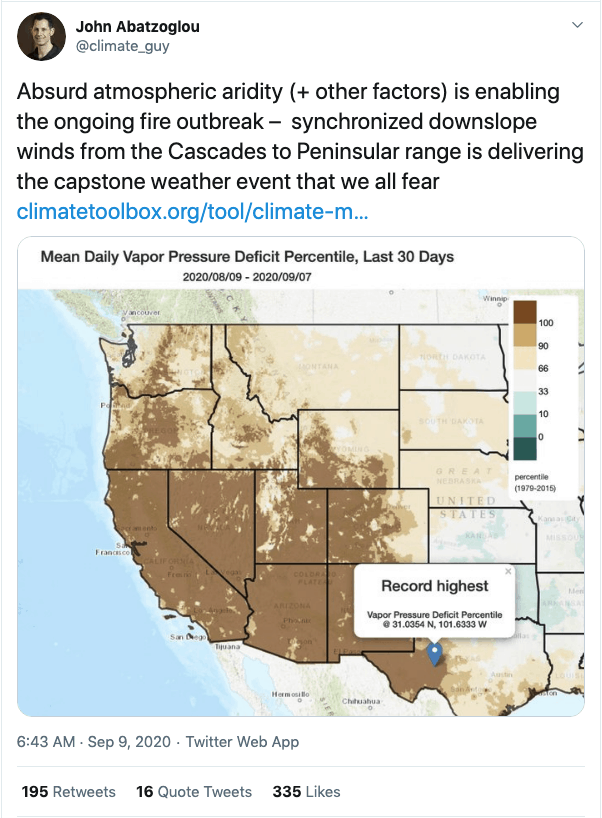 In Washington state, an estimated 330,000 acres burned across the state on Monday, more than the total in each of the last 12 fire seasons. California has seen a record 2.3 million acres burn so far this year — more than 3 times the normal for an entire season (typically July through November), and 7 times the normal year to date.

If it were just this fire season, one could chalk the extremity up to mere coincidence. But scientists say this is part of an ongoing upward trend, made clear by the data and well understood by science.

“There is little doubt that we’re witnessing an acceleration of fire activity in the West – be it in terms of burned area, number of large fires, fire growth, and of course direct and indirect impacts to people,” explains Dr. John Abatzoglou, climate professor at the University of California Merced.

The acceleration has been dramatic. Fire season is now two to three months longer than it was just a few decades ago across much of the West. Since the 1970s, California has experienced a five-fold increase in annual burned area and an eight-fold increase in summer forest fire extent. At least 17 of California’s top 20 largest wildfires have burned since 2000.

Abatzoglou makes clear that there are many factors — not just climate change — that contribute to the escalation of fire activity. These include the increased settlement of people in fire-prone lands and a legacy of fire suppression in many lower-elevation forests, which led to years of heavy growth of trees and brush.

“We can focus on the bad fortune of the lightning siege around the San Francisco Bay Area, or the multitude of stupid human tricks that materialized in large wildfires, but the confluence of long-term and short-term environmental factors set the table for the 2020 fire season,” he said. 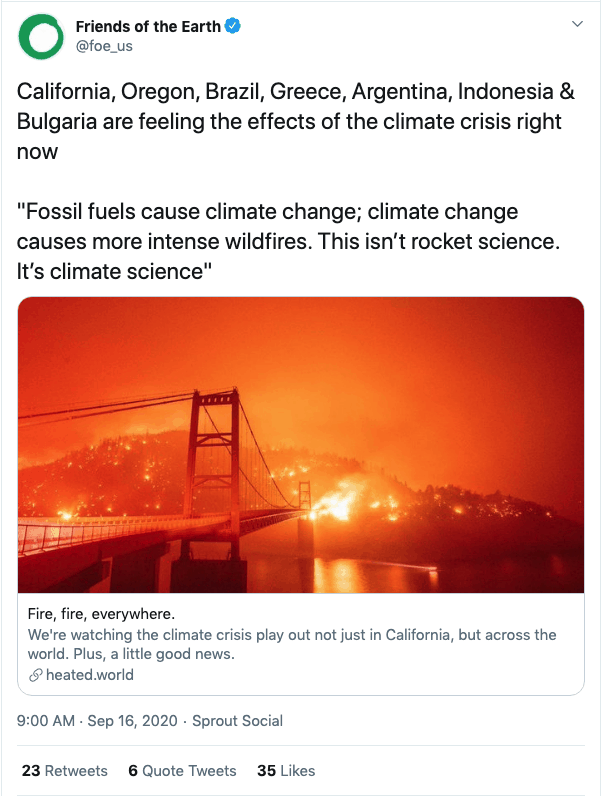 In other words, though climate change does not cause the heat waves or fires, it sets the stage so that when conditions are ripe, like the summer and fall of 2020, heat waves are more intense and fires burn more fiercely.

This summer has been extremely hot and dry in the West. According to NOAA, Arizona, California, Colorado, Nevada, New Mexico and Utah each had their warmest August on record. Research has found that heat waves are now larger, getting more intense and lasting longer than decades ago.  Specifically in California, extreme heat waves — like the ones of recent weeks — are now 3 to 4 degrees Fahrenheit warmer due to climate change. By 2080, that same study finds such heat waves will intensify by another 3 to 5 degrees.

This week’s NOAA report also finds that the same general area in the West also experienced one of its driest Augusts on record. This short-term dry and hot pattern is mainly due to natural cycles in weather, and from season to season has the biggest impact on the amount of area burned because it determines how dry the forests and brush are.

“Across the Western U.S. forests, we find that climatic measures of fuel dryness explain about ¾ of the year-to-year variability in the burned area — highlighting that climate very strongly enables big fire seasons in warm-dry summers and inhibits widespread fire activity in cool-wet summers,” explains Abatzoglou.

But over the long term, human-caused climate change has been gradually drying out the atmosphere and the fuel. “The observed changes in fuel dryness [plus the] number of days of high fire danger have been particularly stark in the American West over the past half-century,” says Abatzoglou.

Since the 1970s the warm season in the West has heated up by 2 to 3 degrees Fahrenheit. This extra heat has increased the evaporation of moisture from the surface. While atmospheric moisture has also increased some, it has not increased nearly as fast as the temperature. That has caused a long-term “moisture deficit” and has accelerated the rate of foliage drying. This is part of the reason why, according to research, the West has entered into one of the worst megadroughts in the past 1,200 years. 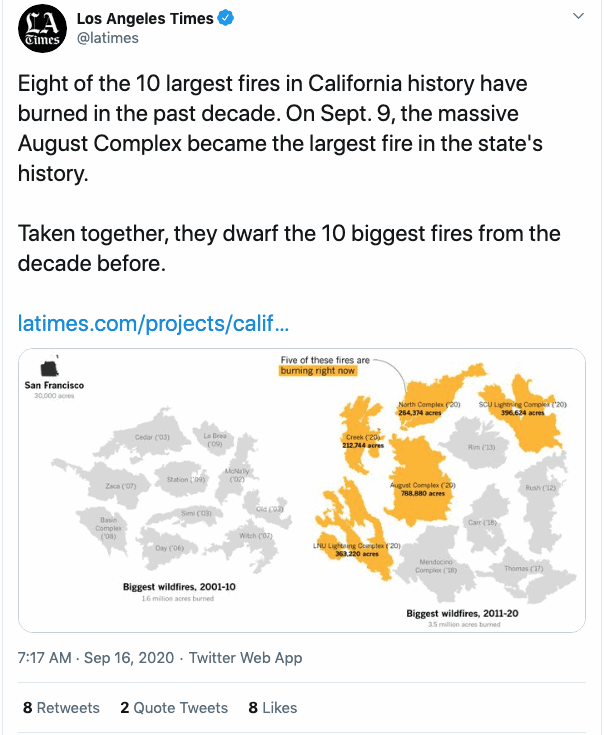 A recent study, co-authored by Abatzoglou, found a direct link with nearly all of the increase in summer forest-fire area during the period from 1972–2018 driven by the increased moisture deficit. To illustrate just how impactful the moisture deficit is, right now, as unprecedented wildfires burn out of control, the deficit is at record low levels in the majority of the Western U.S.

Another recent study from this spring found that the frequency of autumn days with extreme fire weather conditions has more than doubled since the 1980s, fueled by a combination of less rainfall and warmer temperatures.

But many scientists believe that there is more at play contributing to this extreme weather than simply the direct effects of warming and drying. One of those mechanisms is the indirect impacts of global warming on the most influential weather-maker on day-to-day conditions: the jet stream.

The speed and orientation of the jet stream — a river of fast-moving air currents in the atmosphere — determines the track, intensity and forward speed of most storm systems and also how cold or hot the weather is. The attributes of the jet stream at any given moment are determined largely by the placement of hot and cold air masses and the strength of the gradient between them. Because the Arctic has been warming at three times the rate of the rest of the globe, climate scientists know human-caused climate change is throwing the jet stream off-kilter. But how and to what extent is not totally understood.

A number of climate scientists believe that a warmer Arctic is slowing down the jet stream during certain times of year, resulting in a more wavy jet stream. As shown below, a wavy jet stream can catapult warm air northward into the Arctic and drive cold air far southward. This is exactly what happened during the catastrophic Midwest floods in 2019 and is also the kind of pattern we have right now, which is causing record low temperatures and extremely early season snow in the Rockies and Plains. A wavy jet stream is a normal part of nature, but climate change may be making it more amplified, resulting in more extremes.

As a result, when scientists dig into the causes of an extreme event, Mann says the studies underestimate the influence of human-caused climate change. “So if anything, climate attribution studies are likely to under-attribute the role that climate change is playing with these persistent extreme weather events,” he said.

As for future fire seasons, Abatzoglou says we should expect extreme fires seasons like 2020’s to become the rule rather than the exception.

“While the extent of the ongoing fire siege is beyond what most have seen in the West, the alignment of ingredients for such fire seasons is becoming more favourable as a result of climate change and land-use practices,” he said. “We should expect, adapt, and prepare for similar years moving forward.”

This story originally appeared on CBS News and is republished here as part of Covering Climate Now, a global journalism collaboration strengthening coverage of the climate story.