OPINION: F1 sustainability & anti-racism – the good, the bad & the ugly

It’s no secret that the world of Formula 1 (F1) is synonymous with glitz and glamour, and with its revitalised success owing to Netflix and Liberty Media’s rebranding and marketing—it’s no surprise that everyone’s been talking about it. However, there’s much uproar regarding its growing popularity concerning its environmental and social impacts, particularly among its ardent followers.

There’s much to be said about Formula 1 when it attracts a vastly different crowd from its motorsport cousins like NASCAR and IndyCar. No other form of motorsport has the same je ne sais quoi that it boasts. From its technological advancements to its exclusive Paddock Club, it draws a clear line for everyone: they are the pinnacle and the standard. And it’s no wonder that the sport’s management will spare no expense to maintain its legacy, albeit as a “rich white man’s sport.”

But at what cost is it to everyone to sustain this image and legacy, let alone the sport itself?

According to DHL, Formula 1’s official logistics partner, they logged close to 120,000 kilometres last season to deliver the sport’s equipment and supplies. Cars, broadcast and hospitality equipment, as well as fuel and tyres, are needed to be transported across the globe swiftly, and to put this in perspective, it totals roughly the equivalent of three round-the-world voyages.

Furthermore, planes like the Boeing 747 consume around 4 litres of fuel each second and could consume up to 150,000 litres of fuel during a 10-hour journey. If we merely used these figures to calculate the quantity of fossil fuel utilised in a single season, the results would be horrifying—and this is before including private jets, helicopters, and other vehicles.

There is a growing consensus among fans and drivers alike that the current practice of sending teams of people to as many as 21 countries in order to race 20 1,050-horsepower cars around a track for two hours seems borderline imprudent, especially in light of the rapidly intensifying impacts of climate change.

Fortunately, concerns were not dismissed. In November 2019, after twelve months of working alongside experts, the Fédération Internationale de l’Automobile (FIA), and teams and partners, Formula 1 announced a long-term goal of reducing its carbon impact to zero by 2030.

In addition to the Formula 1 vehicles and on-track activities, this plan will include all other aspects of the sport’s operations. The series also revealed that it emits 256,000 tonnes of CO2 each season. And in December 2020, the FIA introduced sustainable fuel, which aimed to achieve carbon neutrality by 2021.

Rather than using non-renewable fuel, F1 aspires to make internal combustion engines more environmentally friendly. F1 is developing a “drop-in” fuel that can be used in any internal-combustion engine without any changes. The air and sea travel industries are also mentioned as potential applications for the new fuel, as F1 relies heavily on their services.

While carbon neutrality was not achieved last year or this year, Formula 1 switched to E10 fuel this season, a blend of 90% fossil fuel and 10% ethanol. Furthermore, with the teams unanimously agreeing to a 2022 engine freeze for various reasons, the sport is determined to have its next generation of engines slated to be on track by 2025, powered by a 100 percent sustainable fuel that F1 anticipates will be available for widespread public use. 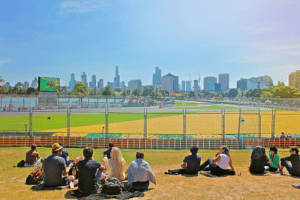 IMAGE: via Pixabay | IMAGE DESCRIPTION: Spectators sit on a field with barriers facing a Formula 1 street track, with the Melbourne skyline in the background

In addition, Formula 1 unveiled its #WeRaceAsOne initiative on the eve of the season’s months-long delayed return in 2020. Its goal was to tackle the sport’s and global communities’ most critical concerns – COVID-19, racism, and inequality.

This initiative was seen as a big step forward for Formula 1. The sport has been notorious for its lack of diversity, with seven-time world champion Lewis Hamilton as its first and only black driver to race in the series.

Mercedes-AMG Petronas Formula One Team, where Hamilton earned his six championships and still currently drives for, announced right before the start of the 2020 season that it will don an all-black livery for the entirety of the season as “a stand against racism and discrimination in all forms and a public pledge to further improve the diversity of our team and our sport.” The team went on to use another all-black livery for the 2021 season before returning to its iconic silver design for the 2022 season.

Hamilton, who has had many racist comments thrown at him since he began his career, has said that F1’s, the FIA’s, Mercedes’, and even Red Bull’s support and statements were the first time he felt he wasn’t alone in the sport.

Prior to the launch of the #WeRaceAsOne initiative, several drivers also expressed their support for the Black Lives Matter movement on social media.

One step forward, two paces back

However, it didn’t take long for the sport to again be divided. During its pre-race stance ahead of the Austrian Grand Prix in July 2020, while all were donning t-shirts with the words “End Racism” in bold white letters, and Hamilton in “Black Lives Matter”, six out of the 20 drivers on the grid were seen not kneeling in solidarity.

While drivers Charles Leclerc and Kevin Magnussen have explained why they did not kneel, it sparked a debate among fans over performative activism and if it causes more harm than good.

This is a stark contrast to how soccer players in England and Germany have taken a knee in support of the Black Lives Matter movement together simultaneously before games. One might wonder whether the correlation between racism and tolerance is rooted in one’s community’s efforts, or lack thereof, to value diversity.

In 2020, while atop the Tuscan Grand Prix podium, Hamilton was seen wearing a t-shirt that said “ARREST THE COPS WHO KILLED BREONNA TAYLOR” over his race suit. Following the celebrations, the FIA was reportedly looking into Hamilton for possibly violating the regulations surrounding what to wear on the podium. While Hamilton was not probed, the regulations he may have broken remain unclear, and he has since said he anticipates new guidelines.

Although, as grim as it may sound, fans are not entirely shocked by the lack of togetherness and apparent racism in the sport, as Formula 1 has been previously run by men with controversial backgrounds and opinions for many years. Former president of the FIA, the governing body of Formula 1, Max Mosley, was the son of the infamous Sir Oswald Mosley, a British fascist politician. It’s been ill-forgotten that the younger Mosley supported his father’s far-right movement.

Former chief executive of the Formula One Group, Bernie Ecclestone, synonymous with the sport itself, has claimed that “black people are more racist than white people are [sic]” when asked about his opinions on the #WeRaceAsOne initiative and believes that it will do nought for the sport.

Role models for the sport

Despite the lack of total unity, it’s no doubt that Hamilton’s role inside and outside the sport regarding Black Lives Matter and equality has been vital and highlighted worldwide. But it has also inspired former rival and four-time world champion Sebastian Vettel to be vocal about his personal causes and activism.

Vettel has been spotted picking up litter after races, cycling to race venues, assisting in the construction of bee colonies, and even vocally supporting the LGBTQIA community during the Hungarian Grand Prix in 2021, when the country just passed a law discriminating against LGBTQIA individuals. Vettel would go on to finish second in that race, but ultimately be disqualified for failing to produce sufficient fuel samples after the race. Many fans have found the coincidence too uncanny.

Alex Albon, one half of the 2022 Williams Racing line-up, has recently stated that both Hamilton and Vettel have inspired him to be outspoken about his views and to do good, and that there is a “responsibility” despite being naturally shy and introverted.

There’s no denying that Formula 1 has come a long way since its inception, whether technologically or through marketing. However, with its constant jumping from one rock to another regarding its views, it appears that the sport decides whether to go one stride ahead, two steps back, or stay where it is, depending on the day, as long as it is able to continue racing and garner views.

We have to wonder how long the sport will last until the fans have had enough and move on to another category of open-wheel racing. And it also begs the question: do fans have a say in the causes they back?

IMAGE: via Pixabay | IMAGE DESCRIPTION: Two-open wheeled cars racing each other on a track, one red, one dark blue.

Rebuilding In A Post-Viral World: Where Do We Go From Here?