Impossible Foods are on a mission to replace meat all around the world by 2035. Today, that journey begins in Singapore.

“Why Singapore? No single city is as diverse and innovative in their culinary scene,” – Pat Brown, CEO, and Founder of Impossible Foods 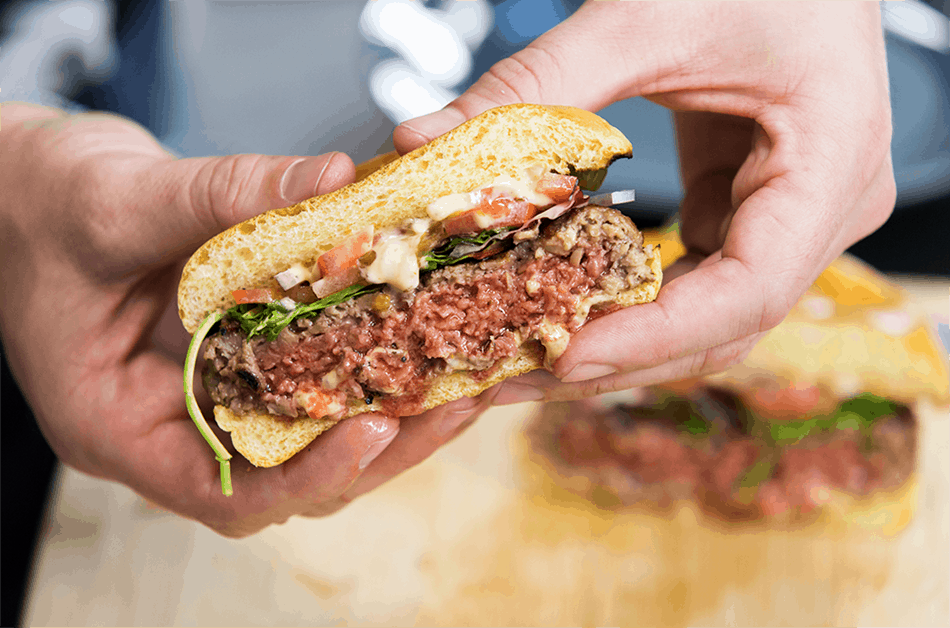 So what’s the big deal?

Impossible Foods debuted its revolutionary burger back in 2016 at Momofuku (yum, go here!) in New York to rave reviews and has been winning mouths over worldwide ever since. Like other meatless products, Impossible Foods creates meat out of plants – where they differ is that their meat “bleeds” and sears – just like cow meat. We have modern science and technology to thank as well as a molecule called heme, which is uniquely responsible for the explosion of flavors that follows that first bite of cooked meat.

In this case, scientists genetically engineered and fermented yeast to produce a heme-like protein called soy leghemoglobin. And voila, the output is a burger that delivers all the craveable depth of beef and is already well-engrained into American culture with the product being featured in 400 restaurants at the beginning of 2018 and skyrocketing to 5,000 by the end of the year.

“It’s our job to make a product that is more delicious and better for the consumers than meat,” Pat told us. “If we don’t make a better product, the meat industry has nothing to fear. But we will, so they do. Introducing Impossible is great for businesses too.” The team has seen huge growth in foot traffic as well as meat eaters choosing Impossible in record numbers.

Not only did Impossible Foods tap into modern science and technology to create this wholesome and nutritious food, but in the process, they are also helping to restore natural ecosystems and feed a growing population sustainably. Naturally, the production of Impossible Foods has a much smaller environmental footprint than meat from animals and by eliminating the need for animals in the food chain, the global food system is also becoming more sustainable itself. With meat-alternatives on the ride, we’re no longer looking at a catastrophic meltdown in biodiversity.

When researching product development, the team behind Impossible Foods estimated that in the last 40 years, humans have cut the total number of land animals in half, which is a result of killing animals for human consumption. But, they know that nothing will be accomplished by simply educating people and telling them to change their diets. “Education and persuasion don’t solve the problem, people always eat too much,” they shared at the Singaporean launch event.

So they problem solved and looked to answer the question “why does meat taste like meat? “They also knew they needed to still offer consumers what they want but find a better (and more sustainable) way and a better technology to produce the same product. It came down to science. “We treated it like curing a disease,” they explained.

Save the planet & save your waistline

Besides this, the health benefits far outweigh that of cow meat. In fact, a quarter-pound Impossible Burger packs the same amount of bioavailable protein and iron as 80/20 ground beef. It also has 0 mg cholesterol, 14 grams of total fat and 240 calories. The revamped 2.0 version contains no gluten, animal hormones or antibiotics. It’s kosher, halal-certified and contains less sodium and saturated fat, too.

“We want to be as sustainable as possible,” Pat added. “We don’t want to take shortcuts and we want to be entirely plant-based. We love a challenge. The dominant thing is deliciousness, second versatility, third nutrition.”

Where to sink your teeth in?

Besides the 150 stores in Hong Kong and Macau, Impossible Foods is rolling out at eight locations around Singapore to start.  “Singaporeans are blessed with and obsessed with great food. They’re among the world’s most demanding gourmets — and I’m sure the region’s chefs will rise to the occasion and create the world’s most imaginative Impossible dishes yet,” said Pat added.

And he wasn’t wrong, here is a list of the restaurants that will be serving it and what’s on the menu:

CUT by Wolfgang Puck (Marina Bay Sands) is the first Asian outpost of the award-winning steak restaurant and executive chef Joshua Brown will now introduce the Impossible™ Slider, which is a remake of his signature mini Kobe beef sliders ($18 for three).

Park Bench Deli (downtown) is serving up sandwiches based on high-quality ingredients. Chef Andrei Soen will feature the Impossible Patty Melt ($22) which will replace their existing Patty Melt made with ground beef from cows.

Privé Orchard (River Valley) is serving a Juicy Lucy Impossible Meatball Spaghetti ($19) and Impossible Satay Sliders ($15), as well as the Nothing is Impossible Beef Cheeseburger ($12).

Also, Impossible will be available to restaurants in Singapore on a limited and exclusive basis through Classic Fine Foods – Asia’s leading importer and distributor of fine foods.

We have it on good authority that Australia and New Zealand are next in the Asia-Pacific region. It will come down to where they can get approvals first. And retailing of Impossible will be rolling out in the US this year, followed by the rest of the world.

View all posts by Olivia Wycech

OPINION: #FreePalestine: Palestinian history, present and what you can do to help

President Donald Trump’s Climate Change Record Has Been A Boon for Oil Companies, And A Threat To The Planet