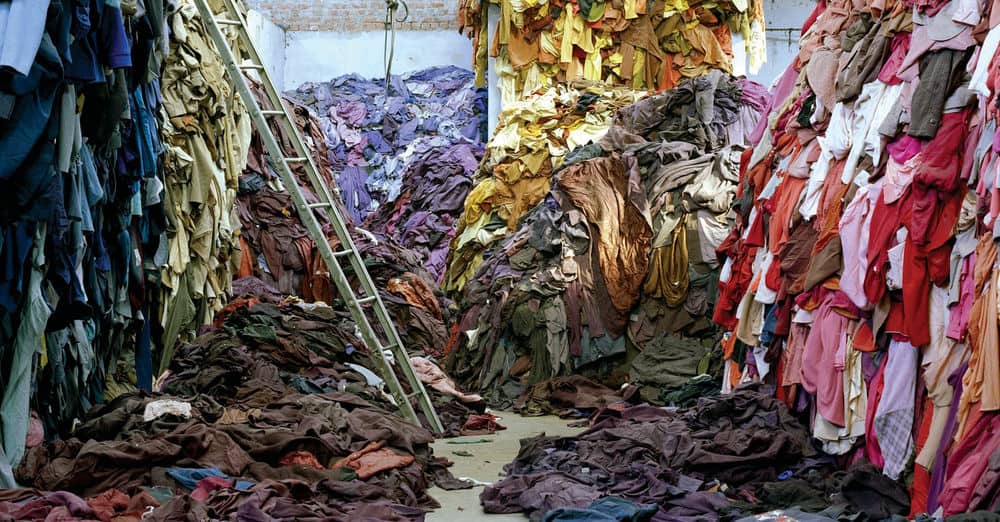 Conversations around the backlash against improperly donated clothes are not novel. The critical gaze cast upon the global west, for using low-income countries as dumping grounds, has not softened. Yet every year, millions of tonnes of second-hand clothing waste reaches the ports of Ghana, Kenya, India, and Philippines. What happens next and who is responsible?

There is a term for the practice of disposing of used textiles in economically under-privileged countries. Activists refer to it as ‘waste colonization.’ While the western fashion industry is held largely responsible for this, consumers carry equal blame. As we continue to buy into large corporations’ vocabulary of take-back programs and recycled collections, we remain ignorant of the ugly truth: not all donated clothing has re-sell or recycle potential. All the rejects (50-70% of donations) are exported. In this journey from disposal to dump, our clothes traverse the globe in an invisible supply chain, affecting livelihoods and environments. 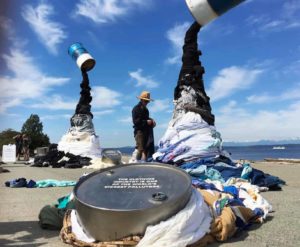 Tracing the journey from disposal to dump

Let’s take a virtual tour of the second-hand rejects’ market across a few African countries: In Kenya, locals visit the Mitumba market, which is Swahili for ‘bundles’ – a reference to the manner in which textile waste is shipped. In Ghana’s Accra, the Kantamanto market is also called Obroni Wawu, which loosely translates to ‘dead white man’s clothes.’ In Zambia they are called Salaula – ‘selected by rummaging.’

While every importing country labels these markets differently, they each enact a supply chain that embraces values from reuse to locally produced; a much-needed scheme in the global retailscape. According to Dead White Man’s Clothes, a US-based multimedia research project in Ghana, port towns receive huge bales of clothing rejects, weighing between 55- 90kgs. ‘Gamblers’ arrive to place bids, with a preference for UK bales. These are considered highest in quality and most profitable, as opposed to those arriving from USA and Canada, which are also cheapest to bid for.

The next step is manual segregation. Cue sorters, who divide the clothes into four sections, ranking from best to trash. The first pile (less than 20% of the total) contains deadstock and price-tag intact garments from pre-loved clothing retailers. The second pile is lightly worn clothing of good quality and the third selection is made up of damaged and visibly used items that require washing and repair. These garments are exchanged between menders, dyers, quality control and re-sellers, usually by means of barefooted female porters. Through re-commodification and extending the lifespan of garments, the locals have learnt to make the best of a worst-case scenario.

The ecosystem of this market has also drawn the attention of African designer-activists. Ghana-based, streetwear label by Samuel Oteng and The Slum Studio by Sel Kofiga feature collections with upcycled garments sourced from these exports. Ugandan designer, Bobby Kolade launched Buziga Hill in 2022, rustling feathers with a project named ‘Return to Sender.’ His idea is to ‘redesign second-hand fashion imports and redistribute them to the global North, where they were originally discarded before being shipped to Africa.’

What happens to unsold garments and waste?

While this local business model may execute every best practice in the art of landfill diversion, large quantities of exported textiles are still designated to trash pickers, within days of arriving. This waste problem is directly proportional to rising health and environment issues. Overwhelming amounts of scrap and rejects not only dominate the market regions but can overflow to obstruct sewage systems under bad weather conditions. Waste management experts in African countries stress that discarded textiles cannot be transported to landfills in refuse compactor trucks (these compress waste to house larger quantity) as the fabrics get stuck in the automatic rotatory systems. This leaves inefficient transportation as the primary choice – with less volumes, long distances and high fuel costs. However, transport is just the first in a series of problems. In these borrowed landfills, textile waste stews in leachates, absorbing moisture from organic refuse and creating ‘high bog density.’ In simple words, a high bog density hinders compression, leaving room for towering mounds of trash and methane production. This gas is highly flammable, causing landfills to catch fire, hence emitting toxins and smoke.

“The United States and Europe have been exporting our plastic to Asia for decades. The general public just found out two years ago, because China said -No, we don’t want it anymore. In that time, we’ve been blaming Asian countries for plastic and waste. It’s the same exact thing that’s happening with textiles.” – Liz Rickets, The OR Foundation & Dead White Man’s Clothes

The extensive waste management systems required in the second-hand clothing trade clearly establish that any claim of circularity is greenwashing. This is a linear model with an extended and mostly invisible supply chain that spans to poorer countries. Moreover, just like any other supply chain, this one is rife with issues of gender discrimination, unfair wages and lack of legislature.

There must be laws prohibiting this discriminative dumping? Yes, there’s a legal grey area regarding the ban of textile waste exports. However, many countries often circumvent it in the name of economic policy and commercial benefits. Hence, the existing notion that second-hand markets are supply-based rather than demand-based is highly subjective.

Let’s look at the two sides of this coin: on one hand, this practice provides employment and opportunities for local businesses, on the other, it renders local textile production obsolete and propagates uncontrollable wastage.

In Philippines, export markets are called Ukay-Ukay or Halukay, which translates to ‘dig-dig,’ or ‘to sift through.’ Though a part of local pop culture, Halukay is technically illegal. According to the Republic Act 4653 of 1966, the government prohibits ‘commercial importation of textile articles that are used clothing and rags.’ Recurring petitions to legalise this trade have been dismissed, despite businesses claiming that these imports are income sources to both the government and citizens.

Contrastingly, many countries have attempted to protest waste import agreements. In 2016, members of the EAC, East African Community (made up of Burundi, Kenya, Rwanda, South Sudan, Tanzania and Uganda) were in favour of banning used clothing waste in order to eliminate steep competition towards a collapsing local textile industry. This motion was quickly halted by the Office of the US Trade Representative by threatening to bar EAC countries from AGOA, Africa Growth and Opportunity Act, started in 2000. All countries gunning for the export ban were silenced by 2019, with the exception of Rwanda.

Meanwhile, in India, this trade is legal and focuses solely on the recycling of textile waste. Local workers in areas like Panipat refer to the imports as ‘mutilated clothing beyond use.’ Here, they are shredded and down-cycled into yarn, insulation, mats and carpets and then redistributed globally. However, waste is inevitable and landfills are expanding to real estate.

Getting to the crux of the matter: a by-product of clothing donation is methane; a gas that is known to be 28 times faster at heating up the earth as compared to carbon dioxide. Along the journey from donation to dumpyard, many other negative socio-economic and environmental issues also come into play. Which leads to the age-old existential crisis: how can something good, like donating, be bad?

“There is no perfect solution. I cannot with full integrity tell you there is an ethical way to donate your clothing,” says Rickets. However, here are some suggestions curated from non-profits, professional sorters and second-hand clothing programs across the world:

With eco-anxiety at large, reports of resale market booms and predictions of second-hand fashion scaling to double in 2030 is welcome news. However, an important chunk of data has been constantly overlooked. It’s time to make conscious decisions about how we consume clothing.

A pre-crastinator with a love for list-making, Aarushi pens down everything, including important conversations to reference later. A self-chat on Whatsapp is spammed with ideas for articles, blogs and notes on the next travel destination. She often visits smaller towns and villages across Europe and Asia in the name of bleisure - interviewing local craftspeople and sharing their stories on larger platforms. Her tryst with the fashion industry began after reading about the consequence of WWII on women's hemlines and skirt lengths. Since then she has been attracted to the socio-cultural and psychological aspect of fashion. Taking her responsibility to voice opinions on sustainability, diversity and craftsmanship quite seriously, she writes regularly for international publications.