Home » Conscious Guides » Conscious Scoop » What does a Biden presidency mean for the climate? 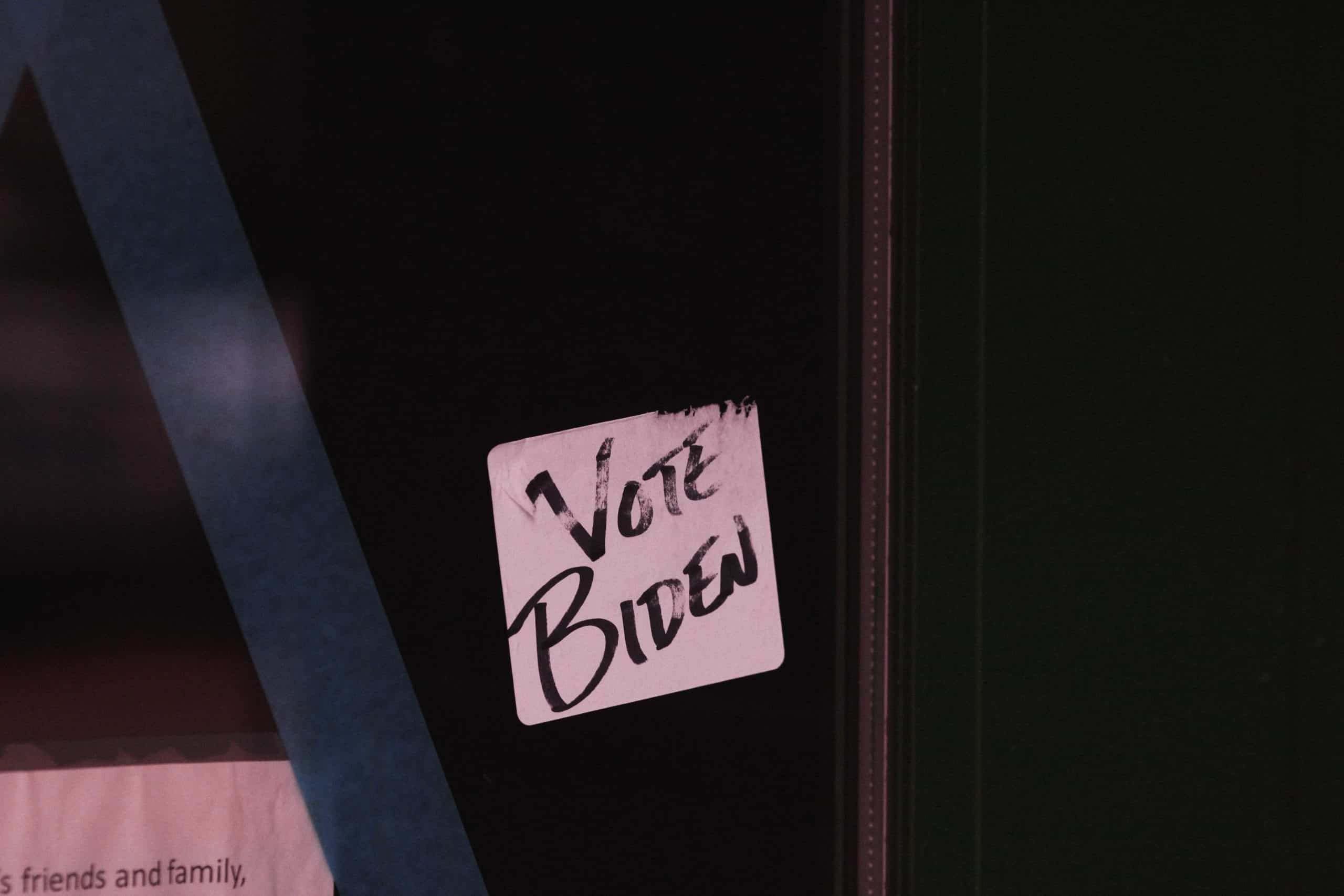 We’re a little late to the party, but Joe Biden won the American presidential election (thank God).WTF does that mean for the climate? We know he’s definitely a better option than Trump, but how much better? We cut through the noise and lay it all out for you here…

Joe Biden’s climate change plan has been said to be the boldest of any president in history. But let’s be honest—the bar is pretty low. In a victory speech, Biden identified the climate crisis as one of his top presidential priorities, saying that Americans must marshall the “forces of science” in the “battle to save our planet”. Gina McCarthy, who helms the Natural Resources Defense Council even said that “Joe Biden ran on climate” and that it’s “time for the White House to finally get back to leading the charge against the central environmental crisis of our time.”

Sounds a bit like saviourism—and it’s true that America is not the be-all and end-all to our climate action (especially when Indigenous communities, climate activists, and the whole rest of the world exists)—but again, we’ll take it. In any case, it’s better than Trump. And in case you forgot how bad Trump was, let’s recap… According to a comprehensive analysis by Rhodium Group, his rollbacks are expected to result in an additional 1.8 billion metric tons of greenhouse gases in the atmosphere by 2035. Can’t wrap your head around those numbers? That’s more than the energy emissions of Germany, Britain, and Canada in a year. (Check out this brilliant visualisation by the New York Times.) Put another way, via Robinson Meyer, author of The Atlantic‘s newsletter The Weekly Planet, “President Donald Trump’s policies accelerated global warming; his officials boxed out climate experts at nearly every opportunity, and he personally seemed to revel in making climate change worse. He still seems to savour it”.

So yes, Biden’s a better option. But how much better? Let’s take a look at his climate plan.

We’ve talked about it before, but Biden’s $2 trillion climate plan is actually quite ambitious. (Here’s a useful visual summary.) It covers clean energy, climate resilience, environmental justice (yes, it specifically mentions frontline and tribal communities), economic growth, and has a goal of reaching net-zero emissions by 2050. Crucially, it involves investing in clean energy research and innovation. It also holds polluters accountable while protecting people of colour and low-income communities. And it’ll be paid by ending fossil fuel subsidies and reversing some of Trump’s tax cuts for corporations and the wealthy. Following Biden’s win, Climate Action Tracker released a new analysis that concluded that if his plans come to fruition, the result “could reduce global heating by about 0.1°C, bringing the goals of the Paris Agreement ‘within striking distance'”.

Whether or not he executes is a whole other conversation, but there are people who won’t let up the pressure. “We’re seeing that Joe Biden has a climate mandate,” said Varshini Prakash, head of the youth-led Sunrise Movement, “and we expect him to do everything in his power to act on climate change.” All those who voted for him, including the youth and people of colour, will be expecting him to deliver. But what could stand in his way?

A transition away from dirty energy would be hard under a Republican-controlled Senate. “Unless the Democrats take over, the seats of two senators from coal states […] are slated to helm the Energy, Natural Resources and Environment, and Public Works Committee, respectively. These committees also have say over whom Biden puts in top-level positions”, says a Washington Post analysis. Which, by the way, also matters. The Atlantic analysis predicts that we’re looking at not just the Environmental Protection Agency and the Department of Energy. We’re also looking at the Department of Commerce, the Federal Reserve, the Federal Energy Regulatory Commission, etc. And who Biden puts in the White House (more on that later).

In any case, many of Biden’s climate proposals “will be politically feasible only with a Democratic Senate.” (We’ll only find out if the Democrats take over the upper chamber in January next year.) Controlling the Senate, the analysis highlights, “is also his only path to appointing Supreme Court justices”.

And speaking of the Supreme Court, this is another obstacle that Biden faces. As a CNN analysis points out, the obstacle is “the joint success of Trump and McConnell at confirming more than 200 federal judges, including three justices who have cemented a solid 6-3 Republican advantage on the Supreme Court. That Republican court majority has signalled it may not only resist new extensions of federal regulatory power but also seek to roll back existing authority long upheld under a legal precedent known as the Chevron doctrine”, among other rollbacks. It gets worse.

Some apparently believe that the Supreme Court might be even more ambitious in overturning environmental initiatives, “if Republicans hold the Senate and effectively reassure the justices that Democrats could not enlarge the court in response to aggressive rulings.”

The CNN analysis hints that the winds of change have begun to blow, for two reasons. The first: that the climate crisis is becoming real. From “hurricanes in the Southeast to wildfires in the West (though polling still shows most Republicans in those states do not attribute them to human-induced climate change)”. The second: renewable energy is actually catching on economically in many of those same places. The fossil fuel industry might have a stranglehold over the Republicans in these states, but this might change. The question is: will these changes come fast enough to overcome the “brown blockade”?

Can we be hopeful?

There is plenty that Biden can do. An extensive list by the New York Times talks of potential, pro-climate, executive actions. He could restrict offshore oil drilling, preserve wilderness, require federal agencies to cut emissions, among many others. With or without Congress, he could also work with some existing laws. (And here’s a post about what he’s pledged to do with or without Congress.) Another option is encouraging global progress by putting climate change at the centre of foreign policy. This is especially important because America, of course, affects the rest of the world. As Ban Ki-moon and Patrick Verkooijen point out, “President Donald Trump’s decision to withdraw from the Paris agreement has encouraged other nations to ignore their own climate pledges.” Yes, all this can be overturned just as easily by the next president, which is why more “lasting and meaningful change would come from working together with Congress to pass new laws that help to curb climate change.” Which won’t be too easy.

Still, we can be hopeful. Check out this Twitter thread by Politico journalist Mike Grunwald that attracted many replies from experts suggesting potential climate action that could happen “right away”. An article in MIT Technology Review also considers more possibilities that we could expect from Biden. Among them: removing deniers, lobbyists, oil execs that Trump put in power, ending the suppression of science, and restoring reliance on it instead.

Ultimately, we don’t know. What we do know is that Biden has to “use every tool in the toolbox on climate action”, and that we can’t look at things incrementally anymore.

Unfortunately, Biden’s already disappointed some. Prakash made a statement just a few days ago that reads: “Today feels like a betrayal because one of President-Elect Biden’s very first hires for his new administration has taken more donations from the fossil fuel industry during his Congressional career than nearly any other Democrat.”

You heard that right. Biden is appointing US Rep. Cedric Richmond to lead the White House Office of Public Engagement. Richmond is “expected to serve as a liaison with the business community and climate change activists.” As a Jacobin analysis outlines, over his ten years in Congress, Richmond has received roughly $341,000 from donors in the oil and gas industry. (That’s a lot.) While representing a congressional district that’s home to seven of the ten most air-polluted census tracts in the country. What’s worse is that he’s repeatedly broken with his party on major climate and environmental votes, and he’s also not committed to supporting a Green New Deal.

With Biden not even officially in the White House yet and already committing the first strike, is it all doom and gloom? Perhaps. But we ought to remember that electoral politics was never going to save us anyway. And that whatever happens with the Biden presidency for the climate, the work continues.