A Widespread ‘Bring Your Own Bag’ Campaign Hits Singaporean Supermarkets

Zero Waste SG is rolling out a four-month campaign that looks to tackle the issue of single-use plastic bags. By reducing plastic bags, ultimately it means improving carbon emissions and the potential impacts on human health when toxins leach into the environment in Singapore.

As part of Zero Waste SG’s ongoing Bring Your Own (BYO) movement, a Bring Your Own Bag (BYOB) campaign has launched in Singapore. From July to October 2019, the campaign hopes to reach more than 1.2 million shoppers. Four major supermarkets in Singapore are involved in the initiative: FairPrice, Cold Storage (Dairy Farm Group), Sheng Siong Group and Prime Supermarket.

Various measures have been put in place in eight of the brands’ outlet across, such as reusable bag donation bins and cashier training to drive the reduction of plastic bag usage. A roadshow and outreach activities will further encourage consumers to refuse single-use plastic bags and not to leave home without a reusable bag. Shoppers are also encouraged to reuse packaging for bagging trash, praise a brand that has reduced their plastic bag usage, and tag them on Facebook/Instagram.

The campaign followed a survey that was done last year where it was found that about 164,500 tonnes of domestic waste disposed of were disposables. That’s enough disposables to fill about 300 Olympic swimming pools. Another study carried out by Zero Waste Singapore in 2016 found that only about 15% of shoppers BYOB or refuse plastic bags at supermarkets.

Hailin Pek shared ‘We hope to create behavioural change by encouraging circularity of existing reusable bags and showing people that it is not difficult to reduce use of excessive plastic bags by refusing when we do not need it, or by bringing your own bag.’ Indeed it is a simple change of habit, that collectively will have a huge impact. And with the year of Zero Waste for Singapore, this is a great way to get involved.

As an entry point to the campaign, take a look a few stats that should help kickstart your participation in the movement. 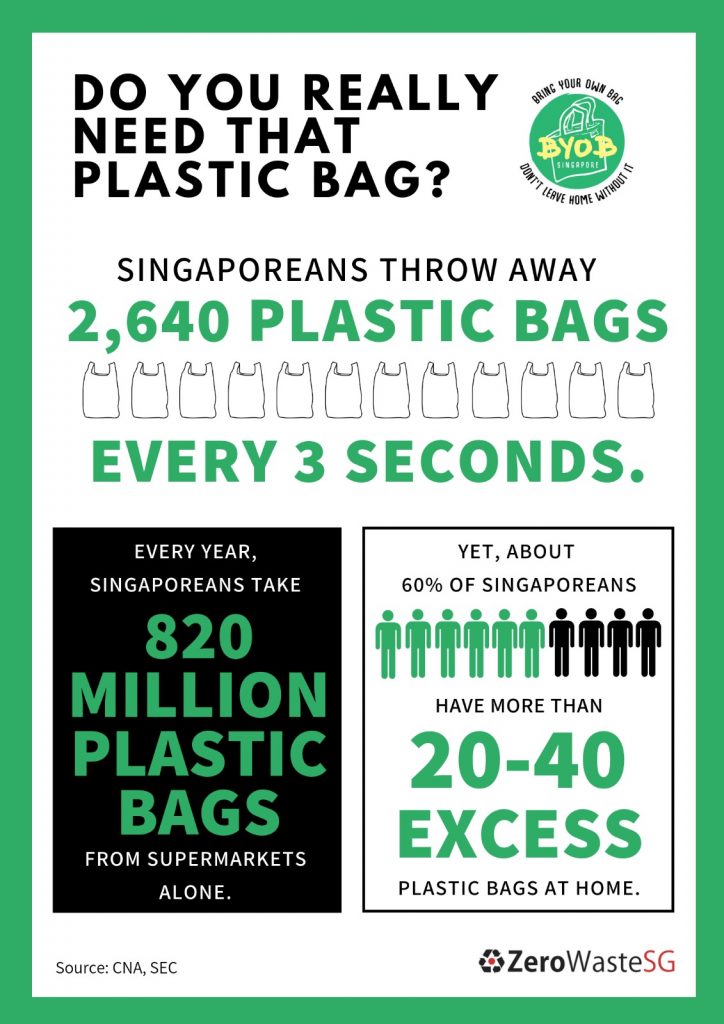 You can participate with these #LittleGreenSteps:

– Refuse single-use plastic bags
– Don’t leave home without a reusable bag (psst.. if you don’t have one check out Peco Bag)
– Reuse packaging for bagging trash
– Praise a brand that has reduced their plastic bag usage, and tag them on Facebook/Instagram

– If you need more tips to go zero waste in Singapore, check out our guide here

This campaign is in support of the National Environment Agency’s (NEA) “Say Yes to Waste Less” nationwide campaign. Find more information on the initiative here and follow there Instagram at @byosingapore to stay updated.

View all posts by Olivia Wycech

Beyond Beauty, Organic Myths & Argan Oil: Behind the Brand with Habiba Raffa